Yesterday was the day for which Alaskans have been waiting, and it came a month early to help pay for the rising energy costs brought on by the rising price of oil. Ahem, that's the story anyway. This is how it plays out in Anchorage.

My co-worker told me she heard that at Costco on Friday morning there was chaos as people made the dash for the big-screen televisions. I guess that's so they can watch the election coverage in all its digital glory. TV trumps weatherization in many households.

At the shop, we expected a little more business than a typical damp day in September. And it was busier than usual. Some people had been waiting to make a bike purchase. A middle-school boy was in with his dad, picked out the bike he wanted, filled out his sales slip and handed over his folded-over twenties to pay for the BMX bike. He was pretty happy with his choice and when I asked if he was saving the rest of his PFD he looked at Dad and said he was.

Later in the day, the regular group of after-school 13-year-old boys came in, must have been about five of them. Most without helmets (despite our helmet law). They hung out, sat on bikes, talked, had Tapia (the other salesperson) put the bikes on the scale... these are BMX jumping bikes and they are heavy! Finally, the boy who was shopping decided on his bike and put his money on the counter. Tapia had him fill out the form, rang up the sale, gave him his lecture about tire pressure, etc. and away the gang went, out into the neighborhood. Thing is, there was no parent around, not even one.

I wonder what, if any, discussions these kids hear about the financial choices they can make with our annual windfall. Saving for college comes to mind; so does a helmet. I hope that the parents are making a conscious decision to allow their sons to go over to the bike shop and choose a bike and give them a spending limit. Somehow, though, I doubt that's happening. I can't even picture myself having that much money burning a hole in my pocket until I was... well, an adult. With bills and college tuition and a job.

It's a crazy time of year in Alaska and each person has their story. Hopefully, they can save or spend their windfall wisely.

Brad had his eye on a single-speed twenty-niner for the last few weeks, so that's where part of his PFD went. He'll use it to commute to school & work this winter using studded tires. A few of us went on the inaugural ride with him earlier in the evening. I think we have a new mountain biker at the shop now. 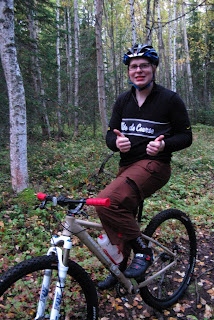 Brad on his sweet new RIG (check out his stylin' socks).
Posted by bikegirl at 9:44 PM

speaking of spending.....do you have any super cool clothes on sale at paramount? am looking for a pick me up.........katherine

are you kidding!?
Yes, we also have our new fall stuff in. I'll be back in the shop on Thurs. - see you at the ride tomorrow?