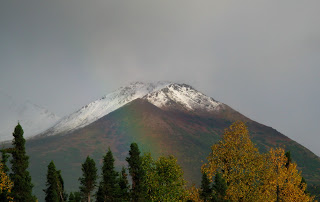 In Alaska, we're keenly aware of the changing seasons as they are reflected in the weather and the calendar. We start thinking about fall as the fireweed blossoms reach the top of their stalks, followed by the termination dust, usually around the time of the State Fair. We measure it in rain and in temperatures, in ripening berries and produce. In snow creeping down the mountains.

The summer of 2008 is now done. The end of the season is finally marked on the calendar. Fall equinox, the day when we have equal daylight and darkness, took place today. Though it is a little off here at our latitude. The sun set before 8pm, which for the rest of the country must seem very late, but for me it's another marker as we race around the sun on this little planet. A headlight for the commute home. The chill in the air as the clear skies let loose the sparse warmth of the day.

Jon and I have an end-of-summer tradition. We do a bike ride on my birthday. Most years I take the day off with him, but the schedule didn't work out that way this year. Since Brad had such a great time mountain biking with us last weekend, we thought it'd be fun to do a ride after work, kind of a shop ride for my birthday.

On Sunday, despite watching storms stalled against the mountains on the east side, we decided to head that direction to check out the new singletrack trails in Bicentennial Park. After climbing up the trail at Hilltop (the downhill ski area), we briefly watched a storm make its way across the area as we hung out in the sunshine. Then, up to the as yet unnamed STA trails for some sweet singletrack riding. 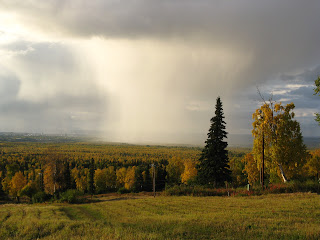 Scattered showers
These are trails that will put a grin on your face! They are twisty and undulating with views over the city and into meadows. For a short time, I could hear the roaring water from the Campbell Creek gorge before the trail looped back toward the Gasline. The leaves that have been falling from the trees under the pounding of rain carpeted some stretches with yellow. 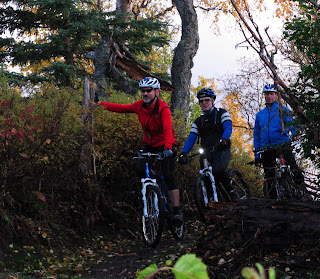 The new trails have been a few years in the making, from the idea to the equipment hitting the ground this summer. Sharing them on a ride with friends just about sums up the mountain biking experience for me. Because no matter what other activities I do, even among the other kinds of biking, I'm a mountain biker at heart. Road biking has never made me grin like this.

So, thanks to everyone at Singletrack Advocates, the trail crews, advisers, Parks & Rec planners, contributors, and especially Janice for making it all happen. As they say at IMBA: "Where would we be without trails?"
Posted by bikegirl at 9:52 PM

Email ThisBlogThis!Share to TwitterShare to FacebookShare to Pinterest
Labels: equinox