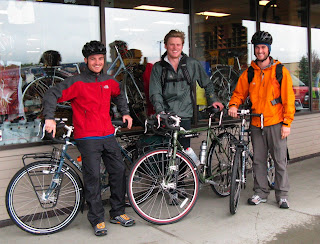 Rob (Bob), Andrew and Mike with their LHTs
Tomorrow the journey begins for three fellows from Australia. After email & phone discussions and a visit to the shop earlier in the week, they're ready to pedal north toward Fairbanks, get a lift to Prudhoe Bay and ride down the continent to points south.

Whenever someone mentions a cycle tour I want to drop everything and go along... though the Haul Road wouldn't be my first choice... maybe I could just meet up with them in Whitehorse? Would Jon mind or would he like to join in the caravan? I roll the idea around in my head and promise to plan a trip. The list is growing.

This afternoon, after the guys rolled away on their Long Haul Truckers, Jon told me that it reminded him of when we pedaled away from a shop on the outskirts of Auckland, NZ four-and-a-half years ago. After an overnight flight from LA and a few hours assembling our bikes and equipment, we pointed our bikes down the road for our month-long adventure. Excitement, mystery, anxiety, happiness. Hoping I could handle the weight in my trailer. Not knowing where we would spend a single night. It was our first tour but we were as prepared as we needed to be. After the month was up, I didn't want to get on that flight home. I wanted to keep riding.

The years fly by. Work and other commitments prevail. In the silly survey in the previous post I tried to answer the question of what route I would want to ride everyday. Funny how my thoughts traveled back to the islands so far from here as I remembered some of the spectacular days spent on the bike. The riding on the Coromandel, on the warm North Island. 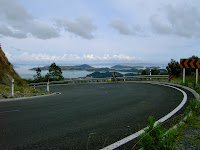 Dipping into the ocean afterward. 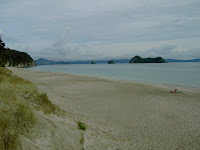 The first ride on the South Island on Queen Charlotte Drive. 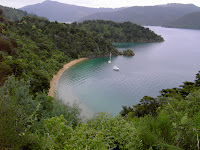 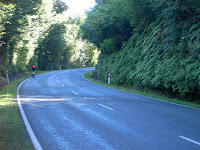 including the full day of riding in the rain between Rotherham and Kaikora.

Jon soaking up the sun in Ikamatua.

It's the act of pedaling from one town to the next. The people we encountered along the way. The varied accommodations. The wonderfulness of occasionally having a real bath towel and clean sheets. Produce grown ten paces from the restaurant kitchen. As I scroll through the photos I remember even more. It's a beautifully simple way to travel and live. One just has to decide to begin.
Posted by bikegirl at 8:08 PM

there is a thin line between doing and not doing it......sometimes, you just have to risk it all and go for it!

Wow, time flies. Can't believe your trip was 4 1/2 years ago. Time for a new trip, maybe with some Divas?

What are you waiting for?