If April showers bring May flowers, what do July rains bring?

For Jon, it's mushrooms. While mowing the lawn last week he found a few small boletes. Now the hunt is on. For Jon is a collector, a gatherer. When nature provides a bounty, Jon will be ready with his mushroom knife or his berry-picking buckets. (August is for berries.) The garage will smell like mushrooms for awhile as the dehydrator shrinks the slices overnight until the season is over.

Biking into work yesterday, for a moment I thought to myself, "Wow, I really pulled away from him on my single speed." Alas, he had pulled off the path to gather some 'shrooms. So, on the way home I rode slowly as he searched for his mushrooms, taking us onto different streets, off the route of the direct commute, where I took time to look around and was rewarded with this: 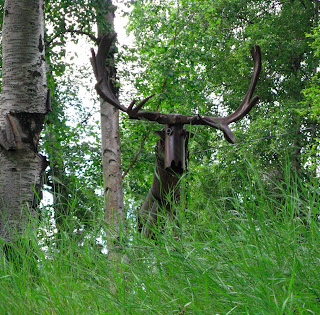 I like how the sculptor used real antlers to top off the creation. 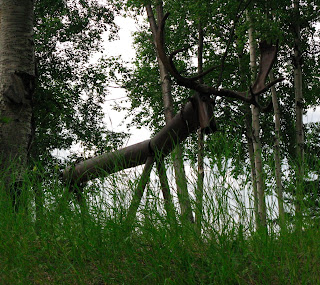 Standing sentinel over a steep bank along a narrow side street.
Yesterday some of my friends were going to bicycle parts of the Anchorage Garden Tour. I was thinking of them on part of my ride, hoping they had been equally delighted by what they saw.
Posted by bikegirl at 8:03 PM

hey -- would jon take us out on a mushroom hunt sometime? we'd love to learn more about it. but if he's one of those people who doesn't disclose their gathering spots, we'll understand. we haven't gotten together (4 of us) in a while and mushrooming seems like a fun thing to do ... and it's usually followed by good eating, right?

hi - oh, he'll disclose to you & Paul. In fact, I wish he had picking buddies to go with so he won't be alone when the bears show up.

Are you in town this weekend?