The media has been paying lots of attention to our friend Pete since he gave aid to young Petra Davis after she was seriously injured by the brown bear in Bicentennial Park a week and a half ago. Pete was in town to participate in the 24-hour race. We spent a little time with him in the frenzied days after the race, catching up on his summer in the Lower-48.

He heads back to S. Colorado today to do more guiding work. He says he wishes for anonymity, but that's going to be tough with how the national media has picked up on this story. Now, the August issue of Outside magazine has hit the racks in Anchorage. An article by Jon Billman, The World's Toughest Bike Race is Not in France, chronicles the writer's experience biking the 2007 Great Divide Race. Pete dropped out of that year's race after coming down with what he thought was either food poisoning or giardia. Still, the article mentions Pete's other accomplishments and includes two great photos of him. (I don't know yet whether they're available in poster size;-)

Until you can get your copy, here's Pete fueling up for his next lap in the 24. (Sorry, Pete, you were stuffing your face the entire half-minute you were there!) 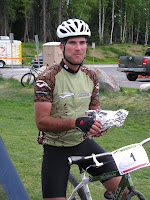 Just got my copy of Outside in the mail today. I'll be sure to read the article soon.

Pete is a real hero.