Thursday Jon and I hiked the Rabbit Lake Trail at the end of Canyon Road. The fog may have kept people away because only a few cars were parked on the side of the road at the trailhead. Walking up the trail into the mist we entered another season. 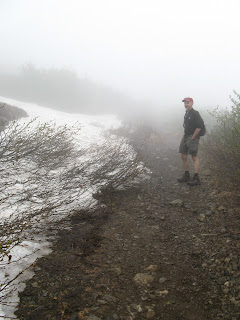 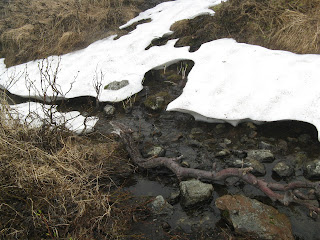 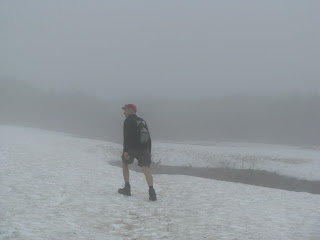 It's been cool in Anchorage, but along the trail there were still fields of snow. Some alder leaves were just opening. Yes, second week of July. 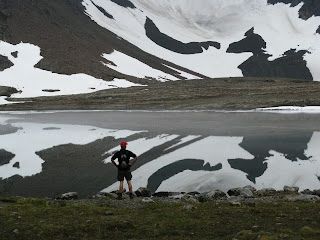 The lake is rarely so calm.
The lake is almost free of ice - just a few cubes had drifted to where the lake flows out into Rabbit Creek. If we stood quietly we could hear them rattling one against the other in the lake, like ice in a glass of water, as 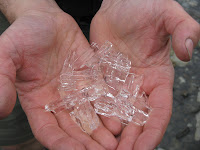 a gentle breeze picked up and pushed some of the ice into the creek.

Along the hike, we ran into a few people, including a retired gentleman named Lloyd who was lopping off alders that were encroaching on the trail. He relayed a story about driving back to the lake in his Volkswagon over 40 years ago. Before it was a state park. His goal was no longer to get to the lake or summit one of the Chugach's many peaks. He just wants to give back. I was too shy to ask to take his picture, so if you see an older man pruning brush on the trail, tell him "thanks." And tell him I said "hi." 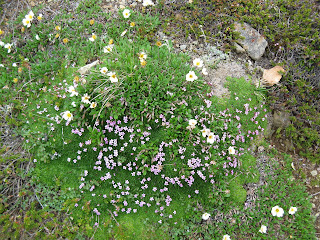 I love the photo of John by the lake with the 'zebra' reflection! thanks for sharing.