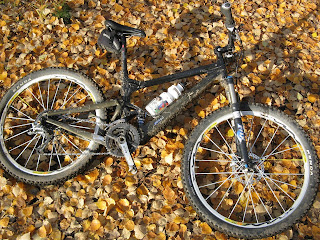 a sweet ride - my Trance Advanced
I don't like do-overs. I mentioned this in September after I again failed to make a little right-hand switchback that's been taunting me all summer.

On Friday, with the framers busy working on the house, the nail guns and power saws making too much noise for me to think, I let the sunny fall day draw me to the park. Each day, more leaves have been falling to the ground with the mere suggestion of a breeze, covering stretches of the trails and opening up more views of the mountains. I pedaled toward the STA trails.

Now that October is here, the barriers which gave Rover's Run Trail to the bears for the summer have been removed. The gently-climbing trail that follows the Campbell Creek was closed in late May, before it could be opened for the dirt season. Last time I rode Rover's there was probably snow on the ground. Yesterday, some of its puddles had a film of ice no thicker than the caramelized crust on a creme brulee and my tires shattered a path through the ice with similar satisfaction to a spoon on the sweet crust. The trail surface was often leaf-covered and alternated from frozen to a half-inch slick of mud to eight-inch deep puddles. I rode on, over to the STA trails. 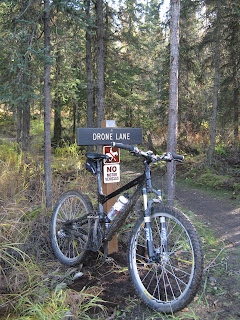 check out the new trail signs!
As I began up Drone Lane, I could hear the slimy mud as the tires lifted it off the frozen, hard-packed trail. It's the gooey time of year. I saw ahead my nemesis. I shifted into the gear I thought would be best for the switchback: 1 and 4. I pedaled up, began turning right and stalled.

Okay, I thought to myself. If there is ever a time for do-overs it is now. After all, the riders and bicycles I began seeing coming down the trail were covered with mud from the fast, splattering descent and I had forgotten to install my fenders. So I turned around and rode down, then rode up again. And stalled again. And again. 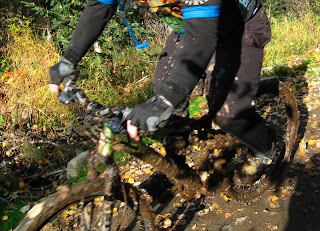 what color's that bike!? 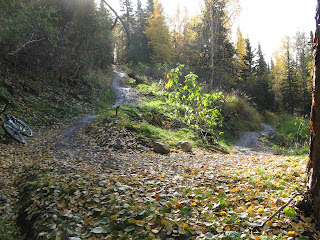 it looks so easy from here!
What was the problem? I was in the right gear, I just couldn't turn tight enough to make it. Maybe, I thought, I can try again, but this time I decided that if I ended up riding into the ditch on the uphill side of the corner, that would be okay. It's not a deep ditch and I was certainly not going to be riding fast. I rode down again to a small level spot where I was staging the attempts. I rode up and, as expected, ended up in the ditch. Two more tries and I was in the ditch but managed to pedal out. I had to think this through some more.

Next time I climbed, I looked at a birch tree ahead of me, on the outside of the turn. Last winter Randy, one of the STA volunteers, had installed a reflector on it to help mark the trail for night riding. I decided that if I was to make this climb, I needed to veer a bit more to the left before cutting sharply to the right. I aimed for the tree, then turned my bar right, looking up the trail, trying to keep from dropping into the ditch. I rode around the apex, then along the edge and up a few more feet of Drone Lane. I could have kept going. But like a musician who finally plays a complicated phrase, I decided to do it again. 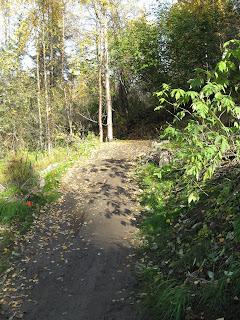 aim for the larger birch, then cut to the right!
(I see flagging - maybe soon we'll fix the grade
where things sloughed a bit...)
And again, and again. I tried to make a tighter turn each time. I must have ridden up and down that stretch a couple dozen times, but I wanted to know that the next time I ride that trail I'm going to know the line just like I know where the letters are on my keyboard. I wanted to know that next time I won't have to think about it as much. That I'll be able to aim the bike and it will know how to make that turn.

Through the process, I remembered my friend Lori joking a few weeks ago when I'd made a tough climb pulling my fully-loaded BOB trailer that I'd shown that hill who was boss (though she used a term I wouldn't use on a family blog). I decided on this corner that rather than dominating it, I had to communicate with it. Talk my way through the impasse until we came to an understanding. Now, I understand that tight bend in the trail. I've made friends with it. We're going to get along just fine. 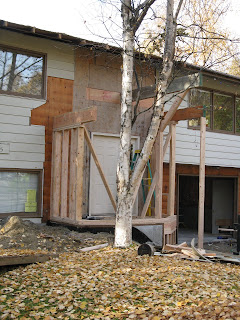 When I got home, they had begun framing
the new front entrance.
Posted by bikegirl at 11:40 AM