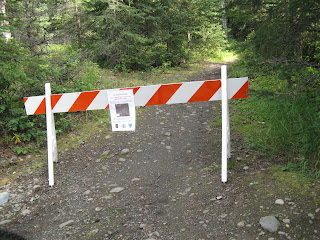 They closed Rover's Run Trail yesterday. Some call it "Mellen's Way," though the renaming attempt has been foiled by the media which refuse to use the new moniker. Nevermind, though, the trail is closed until October by order of the Parks & Recreation department. It's because of the bears. It's because of the people. It's the fish. It's the wildlife managers.

It's for our protection.

I've biked this trail for years. The year I worked on my book I encountered a black bear sow and two cubs. I skidded to a stop and waited, all the while calling for Jon who was behind me planting trail markers for an event. It made me a bit nervous. A bit more aware, in the same way I'm aware when I'm walking down a street at night in an unfamiliar city or neighborhood. Wary but confident that I can handle whatever arises.

Then last summer the brown bears caused trouble. They seriously mauled two people on the Rover's Run trail, one, a teenage mountain biker. After a runner was attacked, the trail was closed until winter. Two men were also attacked and chased on a trail nearby - the Double-Bubble portion of Spencer Loop. A brownie also chased a runner on the eastern portion of Spencer Loop. Both these trails remained open and are open now.

But Rover's has been closed because it is near a salmon stream, though other trails near the stream have not been closed. I've seen brown bear tracks on a trail across the road from this stream. It has not been closed either.

The trail is not the best one in Anchorage's parks, but it's popular and it connects us to other trails. I happen to live just over two miles from it and commute within a half-mile of the trail on my way to and from work. I'll tell you that it was a bit spooky riding through the park last year, especially after the second mauling. Partly because I arrived at the trailhead to find police tape blocking my exit from the trails I'd just biked; partly because an officer was gathering his gun and gear to head out into the woods to find that bear. But mostly because after that second attack, the park felt abandoned, like an empty street in a nameless city. You felt there should be people there but just didn't know where they were.

Where they were was not in Far North Bicentennial Park. They were in the state park, at Kincaid Park on the west side; they were even on the Resurrection Trail where there are loads of bears and little hope for cell phone service (so I hear from people who have cell phones) in case you need to call for help.

So last year the city told residents to stay off one trail, so people abandoned the entire park. We can assume that bears felt comfortable moving in. Now here we are with the start of the summer mountain biking season and Parks and Recreation is closing down a trail. I'm sure there's been lots of pressure to do so (mostly from people who don't use trails). This is precisely what the city shouldn't do. What they should do is tell every mountain biker, hiker and equestrian to fill those trails. Stop-and-go traffic, fender-to-hoof all along the trail. Weekends, evenings after work. Fill those trails.

Because if we are out there making noise, passing through, causing a commotion, no bear is going to want to choose that trail as a buffet and playground for raising a family. Trouble isn't going to move into a busy park.

For the record, I don't advocate poaching closed trails (esp. when there's a camera and they can always find out who you are so you can be ticketed and it makes all of us look bad as a group), but I do think we all need to make a case for reasonable trail management. Closing one trail is a simplistic solution whose repercusions will resonnate throughout the park. Not in a good way. If people don't think a park is safe, will they fund projects to improve it? Will people schedule events in the park helping put more fees in the city coffers? I think not. The people pressuring Parks & Rec to close this trail should think a little more creatively about how to make our parks safe rather than scaring people away.
Posted by bikegirl at 11:18 PM