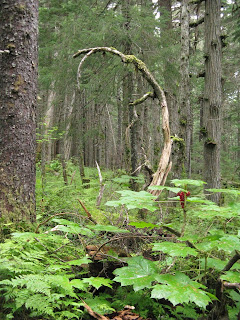 When I was in middle and high school, I played in the school band and in some ensembles. Sometimes, amidst the cacophony of a piece, I could hardly hear myself among the other French horns, the trumpets, trombones, timpani & all the other instruments in the room. It hardly seemed important that I entered at the right time or even if I played at all. At other times, during quiet pieces, it was much more noticeable if I missed my cue. I had to pay attention.

When I became a high school junior, I moved from third to first chair, not because I had improved that much but because the two people above me had graduated and I was "it." I remember Mr. Ebbers, the band director, telling me that he was depending on me. He also assured me that I was ready for the position. That I could do it. Of all the teachers, Mr. Ebbers was the one who I most did not want to disappoint. Not only was band the only class where I had individual instruction, it was also where I felt most at ease and most competent. Even important.

By the time I was a senior, I had earned my first chair. I had tried to be good about practicing in my free time, but of course, one can always do more. I did know that people depended on me, so I certainly worked at it. By the time I graduated, I thought I would major in music. Several years later, I settled on English as my major and, sadly, I was no longer the French horn player I had been.

You have to practice to keep good at anything. Certain muscles have to be used repeatedly so they stay limber and remember what to do. A few years ago I took up the mandolin, and though I'd not played my horn in ages, my brain saw the fingerings on the frets as valves on my horn. It was very strange the way the instruments began overlapping in my mind and it took awhile to learn to think in different keys and to think in strings. But I loved the sound of it as I played each string and tried to play songs from memory. I haven't played much lately, but just thinking about it makes me think it's time to get those callouses going again.

Playing a musical instrument, biking, knitting, writing. They all take practice and they all take thinking. But some of the best moments can come not when I'm trying to think something through, but when I just let something happen. Like when I realize the notes I've just played make up the phrase of an old Beatles tune, or when my mind drifts and suddenly I'm farther down the trail than I thought. Or when one word or idea brings on a wave of clarity I had not anticipated when I first touched my fingers to the keyboard or placed my pen on a blank sheet of paper. Sometimes, we have to not worry about thinking and just feel.
Posted by bikegirl at 7:15 PM

I never feel like I am doing enough.....but, what about just being alive? Maybe that is it - just to live suffices.

I played the piano growing up and later on gave up my lessons to be a cheerleader. Now, how funky is that! Don't tell anyone!