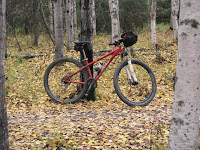 On Monday, my friend Maggi coaxed me out of my house for a bike ride. I'd already gone on a short run earlier in the day and was just sitting down for a little lunch and planning to do all sorts of productive things. It was sunny and in the 50s, one of those days where if it was September we'd say, "There aren't many of these left." But it's the middle of October, usually one of the wettest, coldest, and most get-me-a-ticket-to-somewhere months there is in Alaska.

So I ate half my lunch, changed into my biking gear and pedaled to the trailhead. No clouds in the sky. No wind. No icy spots lurking under the slowly-rotting leaves. While waiting for Maggi, a reporter with her cameraman from a local TV station showed up and asked if I use the park much. Then she said the Rover's Run trail was officially opened that day. Oops. I rode it just over a week earlier when I noticed the barriers were gone. After all, it is October. After giving them my opinions, Maggi and I were ready to get going.

We decided that since Rover's was officially open, what the hell, we should ride it. I was glad I remembered my fenders because, as expected, the trail was littered with mud holes and slippery spots. Unlike last time I was on it, there was no ice. We hit the STA trails, which, also as expected, were well-drained and not muddy, before dropping back down to the Campbell Tract via some wider ski trails, the Tour and Lynx trails.

Good thing Maggi called me. Sure, I was getting ideas about a quilt after having visited the Earth, Fire and Fibre exhibit at the museum with my sister. And I still needed to get my comments in on the Chugach State Park trail management plan. And I still needed to remove the license plate from my car and bend it back into shape after someone backed into me last week at the film fest. But those can wait until foggy, rainy days like today. Making a big loop around the park on a sunny day in October with a friend who loves being on her bike, you just shouldn't turn down an invitation like that. 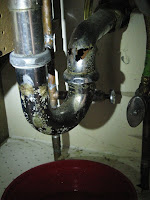 Now, with rain falling and work on the house done for the day, I can finally think. It's our second day where the power for the upstairs, the main living area, is fed by two extension cords from the downstairs; and the kitchen sink drain awaits a new, non-rusted-through pipe. A day where Jon has just ordered our new doors and the third & final support header has been hoisted into place. Each day I can watch the progress and each day we are one step closer to having a level floor and solid walls that will keep out the winter chill. Each day I'm relieved that the temperatures aren't dipping too low and when the crew comments about the rain, I remind them it's not snow. Then we talk for a moment about how unusual it is and I realize it's the least depressing October I can remember, aside from the ones when I've had a ticket out of here. 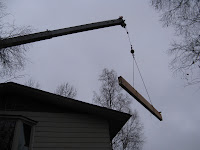