When I was trying to write an essay in McCarthy in August, I had to get outdoors by myself to think. Just down the hill from the old hardware store the river was flowing fast. I was drawn to the rocky shore where I discovered someone had placed stones to look like a Mr Potato Head. It inspired me to begin stacking rocks. 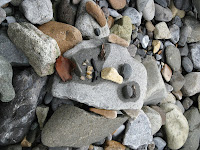 Rock stacks can be trail markers, cairns to help you find your way. They can be joined by mortar to make a fireplace and chimney to warm a home. A wall, holding things in or keeping creatures out. They can be art. A process. A meditation. Before I started stacking the rocks, I selected some that were flat, some that were rounded. They had to all work together.

And when I started stacking these rocks out on the creek bank in McCarthy, I began thinking about my house. I thought of my sloping floor and about how things need a solid foundation. If a foundation isn't sound, it doesn't matter what goes next, the structure will eventually fail. My tower was somewhat precarious, and a more skilled rock stacker would have made an arc. Instead, mine reminded me of a temple, with a shelf for leaving offerings of smaller rocks. I talked for a bit with a passerby, then returned to the hardware store, my notebook & pen and the various activities in each room.

I returned to my rock stack a couple hours later. The water had risen with the day's rain. It was still standing. I thought it was because I'd built it well. But by the end of the evening it had been toppled by the rising water and I imagined the rocks tumbling downstream in the silt and mud-filled torrent. 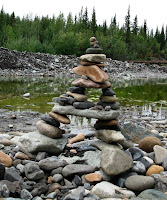 Just over a month later, Jon and I learned that part of our foundation needed to be replaced. The concrete blocks under the front of our garage had deteriorated to the point of not even being recognizable as blocks.  It was unexpected and set us back several days, but when we started the process of expanding the garage and fixing the rift in our floor, our contractor mentioned there would be surprises. This is just one of them. We told him to do what it would take to make it good; to make it last. We expect to be here for awhile. 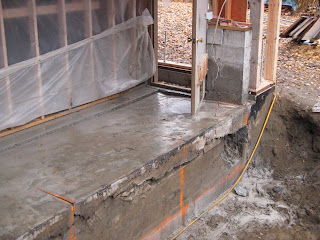 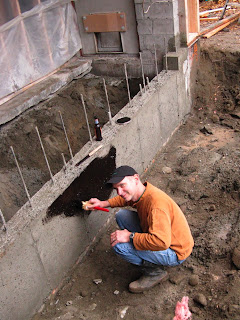 Jon applies sealer to the concrete.