i am, therefore i eat 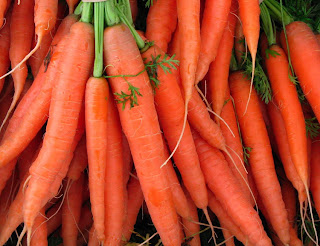 The Alaska summer was filled with long days. How we filled them was up to each one of us. This year, the warmer, sunny days meant more cycling and hiking. People were mostly happier this summer compared to last year. (I'm going to ignore the reactionary talk-radio crowd.) But more than just recreation, people were busy as little squirrels, gathering food for the long winter.

Now, we count the salmon fillets in the freezer or in jars, freezer bags filled with berries, jars of jam. I know Jon collected and dried lots more mushrooms this year. No moose in the freezer, but maybe there's still time for him to join a friend on a hunt and be one of the haulers. 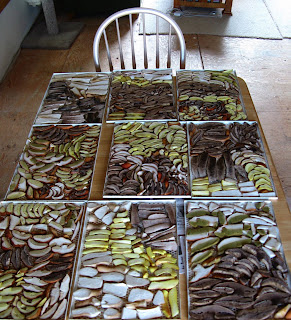 trays of mushrooms ready for the dehydrator * 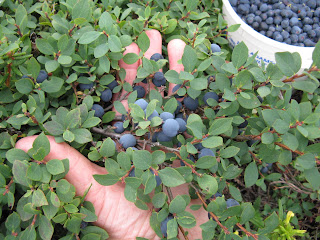 We're now near the end of the season for outdoor farmers' markets where we can get fresh grown vegetables that have never been touched by the air of a long-term storage bin. Carrots that taste like carrots and haven't been peeled and trimmed down to resemble cute, baby versions of themselves. Beets to be cooked, then, still warm, sliced on a salad with bleu cheese, their greens cooked like spinach. Brocolli that has never been drenched in the faux thunderstorm in the grocery store. Creamy new potatoes.

Now, I see we'll have a week-long Local Food Film Festival. And during the films, we can eat food made from local ingredients while drinking local brew. I've outlined my schedule. I don't want to miss one minute!


*For those of you following the remodel, notice the angle of the coffee table. That joint under it is the peak of the rift where the floor is going to be leveled out (fingers crossed).
Posted by bikegirl at 12:40 PM

Oh my! I heard of the mushroom obsession, but there it is! Amazing!!!