The news that Anchorage has earned the title, Bicycle Friendly Community (at the bronze level) from the League of American Bicyclists and is the northernmost city to do so was announced in the local paper over the weekend. I received an email about it the day before and it got me wondering, beyond the recognition, what does it mean to live in a bicycle-friendly community?

Anchorage got the award because of the work of several groups, including the Bicycle Commuters of Anchorage (BCA) and the Alaska Injury Prevention Center which have led education campaigns in the local schools, held bike rodeos and offered clinics to share cycling tips with commuters. Maybe you've seen the PSA the Injury Prevention Center has run on local t.v. stations.

The Municipality has also been working on a Bicycle Plan to identify ways to design better roads for cycling/utility commuters and designate specific routes as bike routes. I've participated in planning meetings and it's been a slow process, but the result should be a blueprint for road designs that include more bike lanes and better signage - part of the educational component. The tough part of helping work on a planning document is watching new roads and intersections go in where the opportunity to build bicycle-friendly roads that will link us to existing routes has been passed up because of budgets or a lack of understanding of cycling and pedestrian issues. For example, mention roundabouts to some Anchorage-area cycling commuters and you will receive an earful about how the traffic designers have failed to understand the dynamics of bicycle commuting and continue to insist that we be relegated to the sidewalk whenever traveling through them. 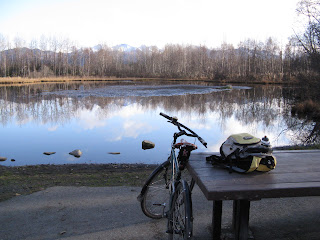 Returning from a trip to the fancy bread store on Saturday. 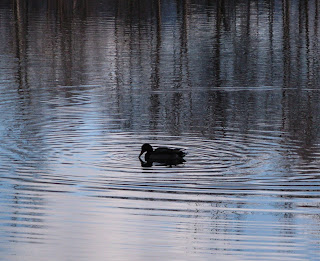 Not all the ducks have flown south... yet.

Meanwhile, in thinking about what makes a bicycle-friendly community, my thoughts inevitably turn to my own cycling experiences and the stories I've heard or read from others. Cyclists getting hit by cars. Teens, adults. At intersections or along roadways. Intentional or accidental. I've heard lots of stories and it usually comes down to a few things that we, as bicycle drivers (a term used by the League), need to understand: people in cars don't see us, and when they do suddenly see us, they can become hostile. Why? Maybe it's because we've startled them.

I've told people for years the thing to remember when riding on the roads and streets or when crossing intersections is that you are invisible. Nobody sees you. When I approach an intersection, especially when riding on a multi-use path, even at a light where I have the walk signal, I assume the driver will not look for me and if they do make a cursory glance to the left and the right, they still will not see me. I'll approach slowly, sometimes yelling "Hey!" That's when they become startled and make their right turn on red to get away from the biker because I am scary and dangerous (hard to believe because I can also be charming). This is one reason I don't like riding on street-side multi-use paths: drivers don't stop at the intersection with the path; they stop - maybe - at the intersection with the cross street.

Lots of drivers don't even realize that some of the laws that cover cyclists on roads and paths have changed in recent years. In a recent letter to the editor, a writer said she thought cyclists were required to walk through intersections! That wording was, thankfully, removed from our vehicle code back in 2005 yet drivers continue to cite it as a reason for them not stopping and even hitting cyclists at intersections. While the letter-writer made a good point about cyclists not being visible enough, some of her assumptions are just wrong, like that we don't have the same rights as vehicles. In many places we do.

That's why bicycle drivers must understand that even though we have the right of way, that doesn't mean the automobile driver knows it. A friend of mine who bikes and also drives a motorcycle puts it bluntly when she mentions people not knowing the rules of the roads: "You may be right, buy you're dead right." Point taken. If motor vehicle drivers do know the rules, would they care? Many won't. But, some do.

They're the ones who slow down and stop when they see me, then wave me through the intersection before they pull through it to make their right turn. That reminds me of another letter in the paper from a road construction flagger. People were cursing at her for a road being closed when it wasn't closed the day before. I'm sure she felt a lot like a cyclist. She was impeding their flow; getting in their way; taking up space where they wanted to be, slowing them for a few minutes. But people are selfish and self-absorbed. All of us. Not just people in cars, but people on bikes, too.

We are important. We are superior because we're riding our bikes to work or the store. We've committed ourselves to a certain lifestyle. The driver is superior, too. They are driving the car they worked hard to buy and they pay for these roads and they are committed to their lifestyle. "Get a car!" they might yell. "Get off the road you f***ing idiot!" *Sigh* But I have a car at home that I worked hard to buy. It's almost five years old and has just over 18,000 miles on it and I try to only put gas into it once a month. I like to see how long I can go between refuels. When I do drive, I consolidate trips. Sometimes I feel like I'm banking fuel credits for vacations or local road trips. That's how I prioritize things. But they don't know that. 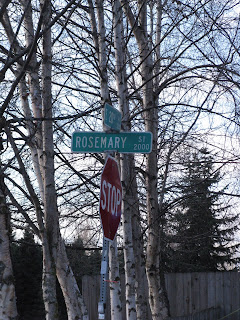 On my jaunt around town Saturday, I came across the street with my name!

The League, in one of their documents that helps teach safe commuting, points out that bicyclists are vulnerable: "We have the same rights as operators of vehicles but because we don't have the protection of a steel cage we are much more vulnerable when on the road. That means that we should be cautious how we exercise our rights in the face of overwhelming force." The first letter writer talked about rights but she didn't talk about responsibilities. Each of us, on foot, astride a bicycle, driving a motor vehicle has a responsibility to transport ourselves in a way such that we are aware of our surroundings and do everything we can to not injure ourselves or others. Hopefully we don't leave people cursing in our wake. If we can go through a busy intersection with a wave, a nod and a smile then I'll call Anchorage a bicycle-friendly community. Our citizens have a long way to go.

As a parting thought, in the context of awarding a Nobel Peace Prize to President Obama with optimism for what he hopes to accomplish, I'll accept that Anchorage could be a bicycle friendly community if its citizens wanted it to be so.
Posted by bikegirl at 10:53 PM

I agree. If Anchorage qualifies as a bicycle-friendly city, then the standards must be very low. Or maybe the awards tells us more about the qualifications of the folks that filled out the application ...

So we should be thinking of car drivers like we do bears -- don't scare them or they might attack! I always assume they (cars and bears) don't see me. So in the woods I ring a loud bell for the bears, and on the street, I opt for the bike path (if there is one) and never cross in front a car whose driver has not made eye contact with me and signaled me to go. I'd rather take a few more minutes on my commute (what a great excuse to be late for work and outside longer), then be 'dead right.'

Bronze?! Well it's a start! Riding my recumbent in Spenard on a daily basis I am sometimes overwelmed by the power and the anonymity of the auto isolation chambers hurtling down the street. Speaking of misinformed drivers...I recently was north bound on the west side of Minnesota (on, I think, a designated bike trail)when a driver pulled into the Shell station right in front of me. I extended my arm in a questioning manner saying "Hey, where is your signal?" This red headed, middle aged man, threw open his door and yelled, "You"re not supposed to be riding on the sidewalk. right?!" Not knowing whether he had a gun or not, I continued to cycle and yelled back, "Wrong!" I was blown away with his anger when I was the one that was almost ran over and had my right of way almost maliciously blocked! Incredible. Like you Rose, I continue to acknowledge drivers that abide by the law and let me pass through the cross walk with a nod and a mouthed "thankyou"! My hope is that there is some good will building there somewhere.

Bad drivers who use "not seeing" as an excuse (I call it "not looking") are the reason I want my left hand to hurry up and heal so I can use that hand to carry along a baseball bat whilst making right hand turns or crossing at crosswalks. That way, I can claim they "ran into" my bat b/c they were not looking. I think a few busted bumpers and headlights would make drivers a lot more cautious;)

I am hopeful the city will make conditions better, but the drivers' attitudes and behaviors must improve. Since most people are motivated by money, I wish I could personally fine each person who has been inattentive, rude, aggressive or all three at the same time. But I can't. (Dang it!)

I assume people are packing so don't do anything to provoke them beyond the yelling. I told Jon this is why he can't own a gun... he would shoot out the tires on the cars & end up getting shot & I'd be without my sweetie and biking partner!

Ride safely, my friends. Heads up!