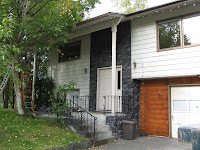 volcano rock & overhang... my office window
is in the upper left. The siding has already been
removed from around the garage door.
For the past two days, contractors have been showing up to do the demo on the outside of the house. In the front, we'll add a larger entryway and remove a roof overhang that prevents sunshine from coming through the window of my office for much of the year. It's not until midwinter that the sun is low enough on the horizon to peek into the room. I guess that's one of the reasons I don't use the my office as much as I'd like during the summer.

The larger entry is partly so that we can install a better staircase. Our early 70s house was built before Anchorage had established any uniform codes for houses and you can tell just by walking up (or down) our stairs - each step has a tread that's shorter than 10 inches and the heights vary among the steps. Over the years I've gotten used to it but we've always known we wanted to change it.

The other good part about changing the entrance to the house is that the volcano-rock facade is going away. In fact, today most of it was taken off by noon. Just stripping off the ugliness is progress. 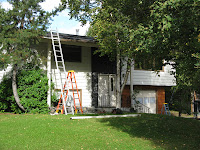 Notice the window in the shade & the wonderful
birch tree out front... 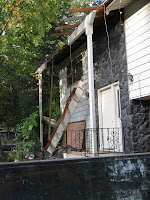 The guys cut out the center portion of the beam
and lower it down so it won't hit the birch tree when
the posts and the rest of the beam fall. 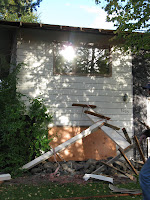 Sunshine on my window makes me happy! 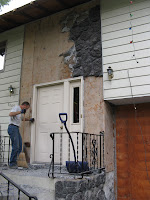 To follow up on the deck demo, Jon got himself a chainsaw. Guess it was on his tool list (he should have told me; it would have been a great birthday gift!) So while the crew was working on the demo, he was cutting the deck boards and I was stacking them for that day when we get a new woodstove. Most of the balusters were still in good shape and one day should be part of a sauna... something that's been on my list for some time... 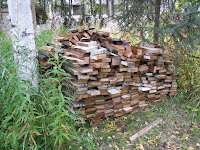 firewood formerly known as our deck,
stacked in the back yard amid the
bloomed-out fireweed.
So, one of the goals of this project is to remedy a structural problem that's caused a peak in our floor. Jon told me tonight that he was talking with one of our neighbors about the project. When Jon explained the project and showed the neighbor the offending beam, the neighbor's hopes sank. He has a similar flaw due to an overhang and thought he could solve it by doing work on the subfloor. Guess we'll give him the name of our structural engineer. I was just wondering today how many Anchorage homes have this problem - a problem that is typically uncovered, literally, when a homeowner decides to pull out their carpet and finds the surprise. Way to stimulate the economy. There are probably hundreds of these!

By the way, Jon took a load of aluminum siding to the recycler and got $61 for his efforts. That's alot of wine or beer. Too bad the Anchorage Recycling Center still hasn't resumed taking in glass... our stockpile is getting embarassing!
Posted by bikegirl at 8:16 PM

I have just installed iStripper, and now I can watch the sexiest virtual strippers on my desktop.