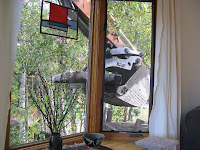 still life with excavator
Kitty escaped the house through her pet door, probably when the backhoe was dropped off causing a lot of racket and vibration throughout the house. A few hours later, a white cat was strolling through our backyard, no doubt excited to make use of all the freshly-exposed soil. I didn't see Kitty, but when I called out to make the other cat leave, I also scared Kitty who ran down the hill, across the street and disappeared into the bog.

I decided to go after her because when she's scared, sometimes she can disappear for an entire 24-hour period in the brush of the Baxter Bog. Walking down the hill, about to pass the house on the corner, a young man was standing on a garden hose that was coiled around a spool. He was leaning into a window. "Excuse me!" I called out. No reaction. "Excuse me; can I help you?" I know that sounds just like something a girl who's worked retail for years would say.

He pulled his head out of the window. The hood of his sweatshirt was pulled over his head. "My sister locked me out."
"Do you live here?" was my obvious question because I didn't know who lived on the corner; at least I wasn't sure.
"Yes."

I didn't know what to do. I crossed the road, looking over my shoulder at the house, calling for Kitty in the bog, trying to devise a plan. I could tell where she was by the cackling of magpies, no doubt harassing her just as they do in our yard when they surround her and I have to shoo them off. I started up the hill, again passing the open window, and motioned through our kitchen window for Jon to come out to help me. What do I do? Do you know who lives here? Neither of us were positive. More hesitating. Jon walked to the bog and called until our already-wild, growling cat was in his arms and trying to claw her way back into the wilds of the bog.

Back up the hill, I called 911. I'm not sure if the person lives there or if they were breaking in, I told the dispatcher. I usually give people the benefit of a doubt. I want to believe that the people around me are honest and have no ill intent. But my gut told me this was a break-in.

I can't see the house from my place. When the police arrived, nobody was there. The window was still open; I told them what had happened. An hour later, they called me again. Can you come over and make a statement? Crap! They had crawled through the same window, found an empty holster. Later I learned there was a missing XBox. That was all. Oh, and a large backpack, no doubt to carry away the XBox and gun.

What was I supposed to do? Could I have confronted him more forcefully? Was there another person? In the back of my mind, I expect bad people to have guns, so protecting myself is highest on my priority list. I was afraid. I could have acted faster, but no matter how quickly I had gotten to the phone, he still would have had time to take those two things. I didn't stop him, but he probably didn't stay long.

Should have thought to send the
dump truck driver to knock on the door.
(click to see why)
I met the homeowner; his brother lives right next door to us & is a great neighbor. I feel bad that I didn't realize this was who lived there because then I could have said "I know you don't live here" and it would not have happened. Kick, kick, kick! But if Kitty hadn't run off, I wouldn't have seen anything at all. Then it wouldn't have been my problem? Well, no, because whether I see it happening or not, a guy breaking into houses in my neighborhood is my problem. It puts everyone on their guard. 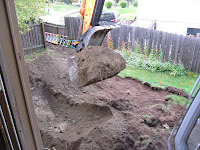 view from the dining room
My new foundation is being dug today, I'm worried that I might have H1N1 and my architect who needs to make some minor clarifications before we can pour the foundation is in Seattle promising to overnight the revised plans. Now some punk lied to me and stole from my neighbor. Not only does that stress me out but it makes me pissed.
Posted by bikegirl at 12:42 PM

Give your pet their own special pet door. Pet doors provide your pets with the freedom to come and go as they please without requiring you to let them in and out every time. Selecting a quality pet door can help save energy during the hot and cold seasons. Choose a pet door large enough for your pet to enter and exit comfortably and safely. Pet doors should have a closing panel for times when you want to secure your Pet Door.