bell on a seat bag

I've not been a huge fan of bear bells or of anything else that distracts me from the welcome sounds in nature. The sound of a stream or waterfall nearby; the call of a jay; the rustling of leaves in a breeze; brambles being pushed aside by a moose or porcupine. I don't wear headphones and am often puzzled when others on the local trails are wearing them.

Music players, cell phones; to me they are part of the big disconnect; an extension of the culture that pulls us farther from the wilds even as we are surrounded by them. A bear bell posed a similar problem. It would cover the sounds I wanted to hear, cause me to add my noise to the others out there in the woods, on the trails. But this spring, after years of not having one, I purchased a small bell.

I liked the shape. Not round like the jingle bells most people carry. It is angular, with four sides, resembling a cow bell, but smaller. More like a goat bell. I used it first on a solo hike, trying to be more bear aware. The bell's sound conjured a vision of goats grazing on mountain slopes, their bells alerting herders to where they roamed. Hanging from my pack, it rang in rhythm with my stride: DING-ding-ding, DING-ding-ding. Sometimes it was silent; sometimes more insistent. Always there. But near the end of the hike, I was done listening to it and put it away in my backpack.

When June arrived and the new singletrack trails were opened for biking, it didn't occur to me to put the bell on my bike. Bells on bikes often just annoy me. But the trails have lots of twists and turns, corkscrews and switchbacks. Some bikes can be almost silent. One evening, as I was descending one of the trails, I heard a bell from the other side of a switchback. I slowed and moved to the side of the trail before the rider came into sight, rounding the bend. We exchanged hellos and kept going. Now, I thought, this is a good reason to have a bell. 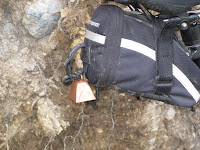 this little bell of mine...
A tiny bell is not going to save me from a bear, and it doesn't replace paying attention. But it might just allow another rider who is paying attention to know that I am there, either coming up behind them or around a blind corner. As for having the sounds of nature obscured, not my little bell. I can still hear the water rushing through the Campbell Creek Gorge. I can hear the birds flitting in the brush off the side of the trail. And if I sound like a grazing goat, so be it. I'm not going to get run over. Of course, that assumes people can hear my bell over their digital soundtracks or their squealing brakes.

I have a bell and I have used it twice. Other than that I do not worry much no matter where I go. Usually others I have been with are mre worried. Interesting enough there are certain people who are bear magnets. Not me, I am not one of them, if I wanted to see a bear I have to go to the zoo.

my "bear" bell has proven much more useful for alerting hikers, equestrians and other riders to my oncoming presence than i could have imagined. of course, if everyone on the trail were using one, we wouldn't be as able to hear other peoples bells over our own....