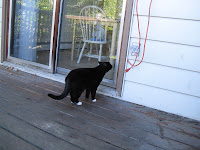 Last chance to go in through this door, Kitty.
Jon and I spent our Labor Day tearing down the back deck that was just off the dining room. Jon has grilled on that deck many evenings. Sunny evenings in the middle of summer; winter nights when it was nearing zero degrees F. Salmon caught in the summer, moose from a hunt with a friend, chicken and steak from the market. It's a small grill, but it probably gets more use than most, the ones that are fired up a few times a summer then put away for the winter. Now it's set up in the back yard, next to a small burn barrel and the newly-relocated wood pile.

I don't know how much grilling there'll be while this remodel happens. Where the deck once stood will be the garage expansion, an area that will double as a shop for Jon to do various wood-working projects and maybe a bit of bike work. The new, expanded deck will go above the addition, but that likely won't happen until spring.

This whole thing started when we (mosly I) wanted to get rid of the wall-to-wall carpeting in our upstairs. Kitty helped to hurry the project by bringing into the house a mouse to play with. When she released it from her jaws, it ran under a baseboard heater and burrowed under the carpet and pad. What better time to pull up the carpet than when there's a little mouse hiding from our cat! Jon pulled up the carpet and pad to find particle board that had been ground down to level a peaked high spot running the length of our house. Pulling it up revealed just how much settling our house had done. More evidence in the garage ceiling showed us how some beams were heaving up to create the peak in our floor. All because of a two-foot overhang without enough support. Anchorage 1970s construction! 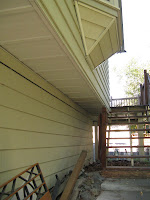 The offending overhang!
That was a couple years ago. Since then, Jon has also torn out our inefficient fireplace and toe-breaking hearth that were in the center of the house. Then we were in limbo, limbo caused by busy work days and a desire to get out and have some fun, vacations and procrastination until finally I made a request. "Jon," I said. "I've never had a 'honey-do' list for you. But this is one thing that just has to happen." He started it; it was his project.

Structural engineer/architect, general contractor estimates, building permit, utility locators, summer weeks flipping by on the calendar. The Dumpster was dropped off this afternoon, ready for the debris of the demolition. Siding will have to go, the project has expanded to include a new front entrance and stairs that will be up to code. In the midst of my attempts to write, I will now be at the house each day as the contractors show up.

I vow to not be a pain and promise to go to the coffee shop a few blocks away when I can't deal with the noise and chaos. But first, I'm going to have to tell them that we want to recycle materials whenever it's reasonable to do so. I mean, come on, can I actually justify putting aluminum siding in the landfill when I bitch at people for tossing away a soda can? Exactly. I'll tell them about that tomorrow. Okay, they might find me to be a pain, but it's for the children... somebody's children. 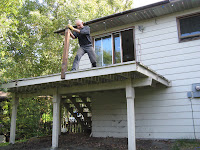 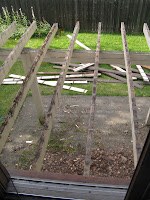 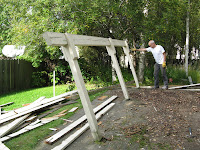 we have some foundation "stuff" happening too and an ugly carport that I have easily grown fond of......always something to do...and I would love to break open the ceilings and erect higher ones towards the heavens....but, we decided to go traveling instead. have fun with it, (I know you will!)