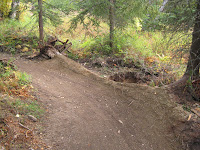 Someone new to mountain biking here in Anchorage took the time and energy to make some modifications to Queen Bee Loop out on the STA trails. He had made a couple banked corners, which can be loads of fun when you're cruising down a hill. Problem was, the berms he created would have blocked water from flowing off the trail in a rain storm. One thing's for certain in Alaska: there will be rain.

My friend Tim was heading up to take some photos last evening so he could rant on his blog. He was so frustrated that he started tearing apart one of the berms that had been built by the industrious cyclist. He'd just stepped aside when the cyclist came riding down the hill and stopped. He and Tim had a conversation about trail design and came to an understanding that this wasn't the way to build trails. Tim went home and wrote up a post. Meanwhile, Janice had gone onto the AK Spokes online forum to talk about trail design. She approached it civilly, pointing out that STA needs hard workers with strong backs (don't we know it!) to help out on trail work days.

Other people (including me) added their thoughts to the discussion of what constituted good trail design, etc. Then something happened. Nobody called names. Nobody berated anyone for their behavior or ideas. Even Tim's post was kind!

Today, Janice was riding the loop for the second time in two days when she ran into the trail builder who was undoing his work and, he hoped, making it better at the same time. He was working with a small folding shovel that fit into his backpack. If you saw the work area, you would know this would be slow work.

And thinking about it this evening, a thought occurred to me: I wonder if because of the events of the last few weeks, the political name calling, the celebrity rudeness, athletic misbehavior, if our thoughts just converged on the idea that we should be able to present an issue, have a discussion, learn what's best for the group and build understanding. It's a great concept.