not all out to get us

I was lurking on the local bicycle forum where someone had posted a link to some stats about bicycle fatalities. Knowing what mistakes drivers and cyclists make might help protect us from ourselves and others out there. This summer, two of my friends were involved in out-of-state bike/motor vehicle collisions. They're both okay, mostly. One was a hit & run. No known witnesses, no memory. He just doesn't know. I've suggested he post something on Craigslist in the area where it happened in case someone showed up at home & told their partner or parent that they didn't know what they hit with the car. I guess I'm just the kind of person who likes answers. Because if I don't have the answer, I'll just make up a story. 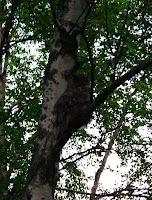 Who?
In my mind, the story has now evolved into an illicit affair, a sports car (based on seeing the bike), drugs or booze and lots of denial on the part of the driver. (Maybe I should write fiction.) I don't understand not wanting to know. I have so many curiosities and unanswered questions jumping around in my mind. For example, what is kitty thinking when I place the laptop upon my lap and she decides there's still room for her? Does she think she's being replaced as official lap warmer? Is she competing? Does she realize she's covering the mouse? You see what I mean: I like to have mysteries solved. But, I digress.

I haven't been bike commuting to a job for over a month. Doing a little mountain biking and riding my single speed across town occasionally. I'll admit my mileage is down. So, the other day I decided to ride over to my sister's place in South Anchorage for a little family get-together. My nephew's 29th birthday. (Happy birthday, Craig!) It was mostly the commute I used to make to the shop, except instead of descending to the business park, I had to climb up her winding street at the very end.

Even though I haven't biked the route in awhile, I'm very familiar with the motorists' behavior at the intersections, especially my favorite: Lake Otis and Abbott. Here's what happened. The traffic had the red. As the crosswalk light turned white, a pickup driver pulled through the crosswalk without stopping, slowed down and turned right in front of me. "That was my light!" I yelled through the open window as his passenger gave me a "what the hell is your problem?" look. After I crossed the intersection I laughed at how they probably couldn't even hear me but I was right. They hadn't stopped. They didn't yield. Hadn't looked. But I never assumed they would. Never assuming is part of our protection.

After having biked that route to & from work for years, I never expect any right-turn-on-red drivers to stop. But I almost always yell something at them. Maybe, over the years, I've even called some a bad name. Or two. I was commuting, what do you expect? Bikers can't occasionally have a little commuter rage? At least I've never purposely run into a car like someone I know. Of course, not all drivers are so ignorant or arrogant.

On occasion, a car will pull slowly up to the crosswalk, see me and stop. I am able to make eye contact with the driver, get a wave to go ahead. When they do that, I smile and say "thank you." By taking the time to notice and acknowledge me, they have just brightened my day and for a few moments, I have hope. Not every driver is trying to run us over. I figure they're another biker. Or they have actually read the rules of the road. Or they're Chechakos and haven't learned that in Anchorage stop lines are just a suggestion. To those drivers who follow the rules: thanks! To those who don't look and don't care: I wish for your children to become cyclists; avid cyclists. Will you see us then?
Posted by bikegirl at 10:19 AM