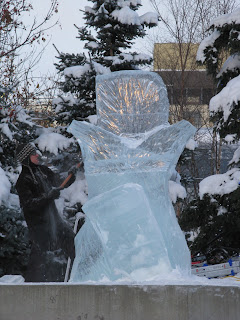 Eric and Jennifer met last year at the ice carving competition. Just over six months later they got married. Their wedding, coincidently took place on our 10th wedding anniversary -- yes, the day Jon gave me the pair of pigs. Sure, that's a short time to meet and get married but when it's right, it's right.

Today they were downtown at Town Square Park carving their new creation in a prominent spot above the skating rink when a local reporter approached. 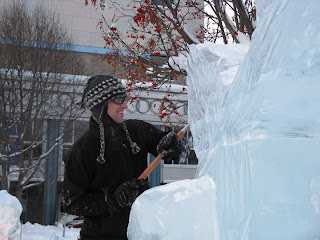 Eric carving ice into water.
The couple told the story of their sculpture then told her how they'd met. I could see the reporter's interest. How wonderfully romantic it is to return to the place where they met and enjoy the activity that brought them together. Single-digit temps were chilling most people and a gaitor covered Jennifer's smile, but that kind of happiness could melt the ice in the rink. 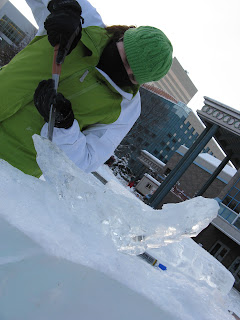 Jennifer carving a salmon.
The carvings should be done by Sunday evening for the judging. I think I'll check 'em out again.
Posted by bikegirl at 8:31 PM