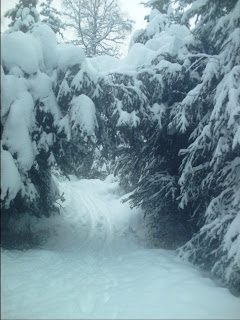 through the steam on my lens
Today I had the day off and since the snow had been falling since early last evening, I headed out to the park for a ski. I was the third person on one of the trails, after a snowbiker and a hiker. The park was mostly silent as the snow insulated the park from most road traffic noise. A few birds, their songs unidentifiable to me, flew through a meadow. I haven't been doing any biking this past week. I have a good reason, though.

Each December for just over a week, Jon and I put aside any bike commuting aspirations, delay addressing holiday cards and beg off work early so we can take in the films at the Anchorage International Film Festival. This is the eighth year of the fest which brings in features, some classics, documentaries, shorts and animation. Local entries are included in the "Snowdance" portion of the program.

The festival is a movie-going buffet for us since each year we get the all-films passes and hope to pick the best films and see the most we can. This year, I'm not as obsessive as I've been in previous years. One movie per night can be enough... but not always. Tonight, it's the Bear Tooth at 5:30, then the Museum at 8. If you're an Anchorageite, you should check out the second half of the fest. If you're a filmmaker, hey, submit something for next year. I'll go see it!
Posted by bikegirl at 3:59 PM