christmas in the garden

Snow was falling this Christmas day. It was mostly quiet but we made sure to fit in some outdoor activity. Since I'm off the bike and skis for a bit, we went out together -- I had my snowshoes and Jon had his boots and gaitors. If we have any holiday tradition at our house, above all it is that we get outdoors to do something.

We've had several snowstorms in the last few weeks with no wind or warm weather to blow or melt it away. The trees are bent by the weight of the snow, some of them crushing fences, others leaning against neighboring trees, still others arcing over until their smallest twig-size branches hit the top of the snow that is on the ground. 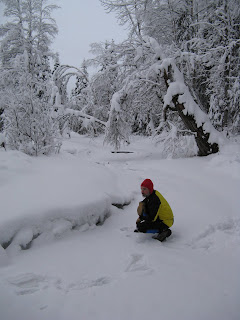 Jon listening to the gurgling creek.
We were in the Alaska Botanical Garden, wandering on the nature trails, then on the creek ice. Nobody else was there, though we did watch a moose munching on twigs inside the garden. A couple years ago the garden installed a perimeter fence to keep the ungulates out. But with all the trees that were knocked down in the windstorm two months ago, I'm sure there are places where the fence has been toppled. 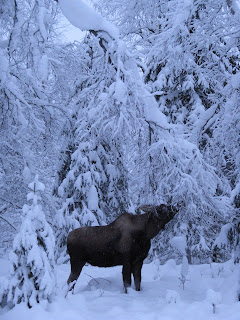 Garden-variety moose munching branches on a leaned-over tree.
It was good being out in the garden on this short winter day with no one else around. As we prepared to leave, we began to hear ravens overhead as they made their evening journey back toward the mountains where they spend the night after a day in town. 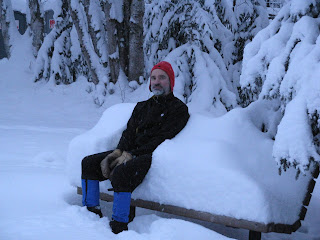 Jon rests on a bench.

With the holidays winding down and my hand making a steady recovery from surgery, I hope to be back on the bike in maybe another week or so. I can probably ski sooner. Either way, it'll be good to get back into some sort of consistent exercise schedule after a couple months of commitments to other things. That'll be a good way to start the year.
Posted by bikegirl at 11:16 PM

Standard Exercise bike features include speedometer, odometer, and heart or pulse monitor. The speedometer is important because it is the best way to measure if you are getting a consistent work out.

Proving again that the right combination of words will lead the bots to find you. I think a speedometer is important too, mills.