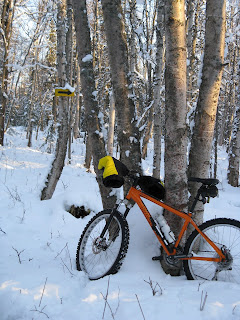 my commuter w/SnowCats, studs and poagies
Back in September Jon was interviewed for an article in Bicycling Magazine. He talked about winter cycling and the equipment that makes it easier for us to ride year round. While we were on vacation in October a photographer stopped by to take some shots for the story. We weren't sure when the story would appear, then the emails started.

People from Chicago, Colorado, Pennsylvania, Minnesota, Wisconsin, Ohio, Toronto -- the list keeps growing -- had received their January issue of the mag. Now they were looking to make their commutes better, warmer, safer. Many had never heard of studded tires and handlebar poagies, then here we were, this family-owned shop in Anchorage getting a little attention from around the country and from our neighbors to the east. Each day a few more emails and phone calls. People wanting to talk about riding conditions and how much daylight we have (not much right now). People very appreciative that we could help them out.

It took a few weeks for us to get a copy of the issue and overall it's pretty accurate as far as the equipment and the recycling go. Jon hopes to not be called out as a fraud when people learn that he doesn't commute every day as the article stated. I imagine him saying he commutes "most every day" and having that key modifier dropped. Oops. 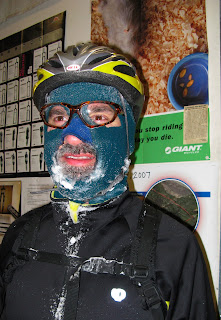 Jon arrives at work wearing his homemade face mask.
Judging by the beardcicles, must be around zero out.
There's lots of competition among shops in Anchorage, especially to get the limited winter market. Through the article, the shop's customer base just ballooned to include much of North America. I think that's pretty cool. It's also cool when our longtime customers come in and say they saw and liked the article. It validates what we've built over the last 10 years. It also makes a very slow time of year just a little more interesting.
Posted by bikegirl at 3:00 PM

congratulations on the article. it was fun to read about it from the other side of the world.