I knew the Ship Creek Trail grand opening was coming up. I just didn't save the date. So, today I thought I'd take a little road ride - well, mostly a paved trail ride - to check out the new trail. 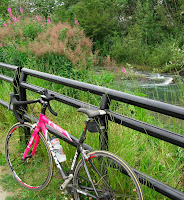 heading downstream
I'd been on parts of it before, but now the bridges are in and it's mostly done. Just some landscaping and a few more benches to add.

I rode over to Mountain View, one of Anchorage's oldest and most diverse neighborhoods. Rode past the street where I used to live - my first apartment in Anchorage. Then down the hill to get on the trail at Tyson Elementary School. 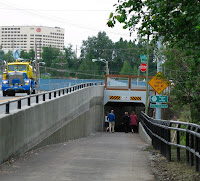 under Post Road
The trail follows Ship Creek through the industrial valley until it reaches a hotel and popular urban salmon fishing spot. I ran into a cameraman from one of the tv stations who told me that the trail had just been dedicated but he thought they should have staged it at a cool bridge he was shooting. I'd agree, it was the nicest (and highest) bridge on the route. It's simple and after crossing it, the trail curves and goes under the bridge. (The largest expense on a trail project like this is bridges. Anchorage loves building trails along its creeks so I think our trails are pretty expensive. I'm okay with that.) 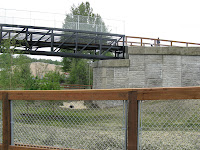 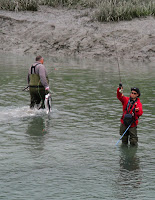 success!
Soon I was in the salmon fishing zone where tourists were milling about. I left the trail at C Street and headed past the railroad to reach the Coastal Trail, then Chester Creek. Another cool day outside but it was nice to be on my road bike and in no particular hurry.
Posted by bikegirl at 3:41 PM