at the state fair 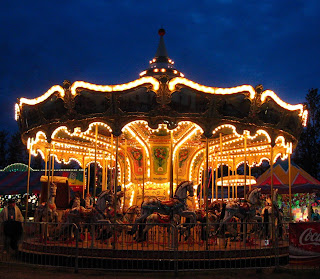 We cut out of work early on Tuesday and headed to Palmer for the Alaska State Fair. We had tickets to see Ralph Stanley and his band play, so decided we should leave a little time to stroll and snack before meeting our friends for the show. The fair is one of the best places to people watch. People let down their guard. Walk around looking a little disoriented. Allow themselves to eat lots of fried food, and have their hair styled and dyed in a rainbow of colors: 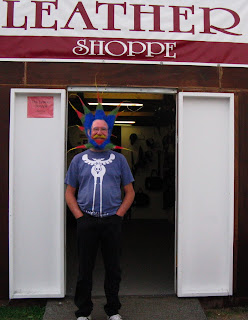 Working his booth.
First, we checked out the animal barn. Saw cows, pigs, chickens, ducks, goats and sheep. The local 4-H was selling tickets to raffle a pig, so I bought a couple $1 chances. That would sure fill the freezer, though mostly it helps out the kids. 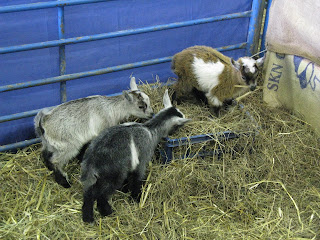 Not these kids, but human kids. These are pygmy goat kids.
(That's a milk crate in their pen.)
People working their booths offered an array of goods, from t-shirts to pottery; original jackets and bags; beads and even saunas. There were booths for the political parties too. We stopped by the booth for our maybe (please) future prez, Barack Obama. 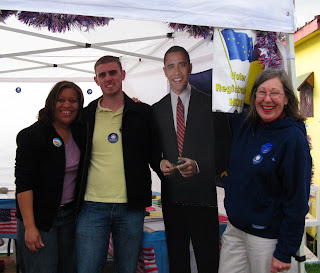 He'll address the Dem convention later this week - meanwhile, see him at the fair.
(Volunteers and staff at the Obama booth.)
The show was good - and it seemed like all the musicians truly enjoyed working together. They shared some jokes among themselves and with us they shared a selection of tunes that spanned Ralph's 60-plus year career. 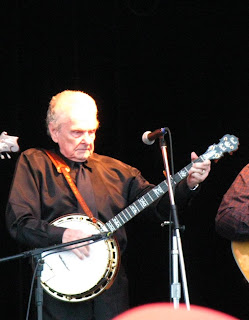 Still singing and playing at 81.

It was cool and a few sprinkles fell, but it was a pleasant evening to be outdoors. We strolled the grounds for awhile after the show before driving back to Anchorage. The rides were lit and the exhibits were starting to close. Then we spotted this gem: 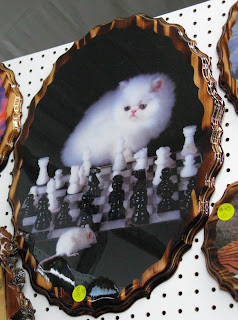 Dogs playing poker I've seen. But this is the first time I've seen a kitty and a mouse playing chess. I don't know if the artist is making a statement about the intelligence of cats & mice, but I think chess may be harder than poker. And that cat sure looks like it feels superior.
Posted by bikegirl at 11:08 PM

i bet you could teach kitty to play but i bet she'd cheat.

we're headed to the fair tomorrow. i really wanted to see ralph stanley but couldn't easily with family here. glad you got to go enjoy for us!