I was biking behind Jon the other day when I realized I had a slight advantage. We were on a narrow thread of trail on the Campbell Tract and I could see his front wheel wiggling a little as he regained control on the fresh snow. It reinforced what we already knew: people who ride on wider rims aren't necessarily better riders; their equipment affords them a better ride. 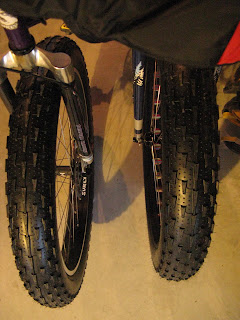 The same tire, one on a 65 mm rim; the other on an 80.
I've noticed a difference in the last few weeks as I've been riding around on my new snow bike. I know: my old snow bike was perfectly fine; practically new. But earlier this winter Jon came home with a question: "What would you think of selling your Pugsley?" Hmm. I hadn't thought of selling the steel snow bike I'd only owned for a few years. I didn't need a new bike. Not that this has stopped me in the past. I asked Jon what was up. 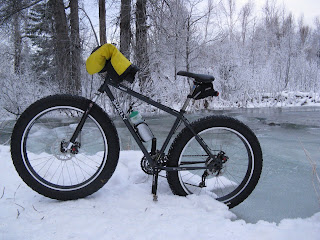 So long, Pugs. You're a steel beauty, but you're off to a good home.
A friend of a friend was looking for a Pugsley and they were out of stock at Surly. He also had a tight budget. I knew the Salsa Mukluk snow bike had been in high enough demand that the shop had sold out of its first shipment and was awaiting more of the aluminum frames. I agreed to the new bike as long as there would be no gap in my snow bike availability.

I've had the Mukluk for a few weeks now and will attest that I noticed some differences right away. Besides having extra standover clearance (a major plus), the bike came with wider rims than what I had on the Pugs. The Pugs had 65 mm wide rims, where my Mukluk has 80s (you can run 80s on the Pugs; I just didn't). With the wider rims, the bike felt even more stable, it cornered better and I could really tell the difference at slower speeds (which is where I spend so much of my time). 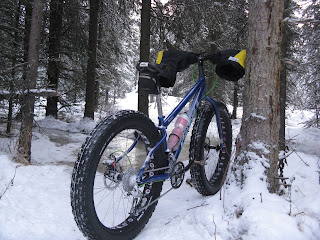 The lovely Mukluk. Welcome to the stable.
It wasn't until I was riding with Jon, though, that I could see just how significant the difference is. He's still on his Pugs with 65s, so wherever the trail hadn't seen much use since the previous evening's snowfall, he had to work a bit more to keep on top of the hard-packed trail and not dive into the deep snow alongside the trail. I, on the other hand, was just plowing through the few inches of snow, sure and steady.

Now I'm glad somebody wanted to buy the Pugs. I hope it's now in a good home because it's a fun bike to ride and deserves to be ridden. I'm happy with my custom-built Mukluk. We're going to have some fun together. Now I hope I don't soon have the urge to upgrade any other bikes, because whenever I do, I feel a need to go back to work at the shop. It's a never-ending, co-dependent relationship. Think Jon doesn't know that?

I didn't mean to hold this post so long before publishing it; since writing it in early February, I've been to Wisconsin & back and had lots more rides on my new beauty. Now I'm feeling the urge to explore new winter territory...
And, just for the record, I will be working at the shop again this spring. I do get an employee discount on bikes & gear, but I don't get free stuff and neither Surly nor Salsa are paying me to write about their fat-tire bikes.
Posted by bikegirl at 8:18 PM