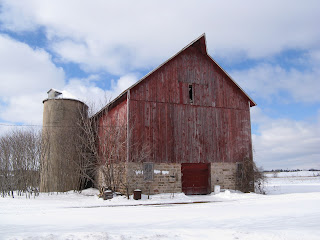 Along Highway 12, near Baraboo.
I arrived in Wisconsin in mid-February, during the start of the Big Demonstrations at the state capitol, but instead of getting my protest on, I spent lots of time in the rolling hills of the farm country northwest of Madison, a region they call the driftless area. That is, during the last glacial period, the area wasn't covered by glaciers, so that no (or very little) drift was deposited in the area. Long ridges, steep slopes and bluffs make the area a little limiting for farming, so corporate farms aren't that prevalent.

I stayed in the small town of Wonewoc, which was built between sandstone bluffs and the meandering Baraboo River. Just one stop on the former railroad line between Chicago and Minneapolis which is now a rail-trail. I visited cheese factories, drove some backroads and even stopped in at a dairy farm. If you've never been in a dairy barn, if you weren't raised with the scent of the barn, that sweet, rich scent that combines alfalfa, corn, oats, cow dung and warm milk, then you won't understand how comforting it was for me to duck into the barn during the middle of yet another Midwest snowstorm.

My dad got out of farming when I was a little kid; I only remember the time we raised one steer for butchering. But my aunt and uncle lived up the road and had a dairy farm. My two cousins, younger brothers and I would play in the barn. I remember riding tricycles scooter-style down the aisle between the manure gutters, racing each other and hoping we didn't fall into the manure. We built forts in the hay mow and I remember trying to help out a few times. But I wasn't a farm kid. We gardened; we didn't farm. 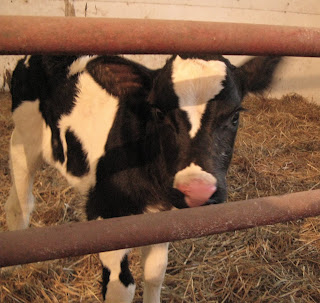 Just a day old.
But I was still raised with that scent and raised on the fresh milk my dad would bring home from the farm in big metal pails. After the milk was cold, we'd stir the cream back in before serving it for dinner. No soda on that table. Sure, in the summer we'd sometimes have Kool-aid, but mostly we were a milk-drinking family. Though I remember when we'd have milk break at school I couldn't stand to drink the white milk; it tasted watered-down and almost bitter. Not the sweet milk I got at home. I'd go for the chocolate milk if I could; just to cover the blandness of the processed milk. 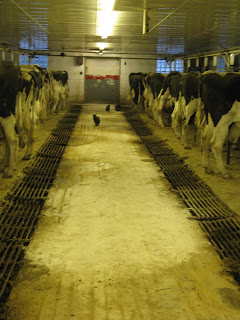 I helped clean the barn. Know what? Cow manure is heavy! 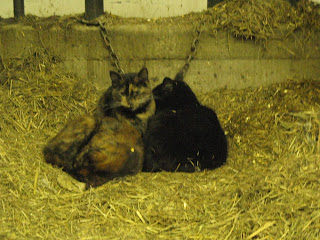 Kitties in the straw await milking time.
On the Goodman farm, I visited with a day-old calf, helped scrape manure into the gutters and checked out the barn cats who were probably intrigued that a human was paying attention to them. (I probably got in the way a little, too.) Earlier in the week I'd bought cheese at a cheese factory that only uses organic milk, including milk from the Goodmans. Now, tucked in a bag in my fridge here in Anchorage are a couple bricks of cheddar that I like to think include milk from the small herd I visited. I know it's going to be good. 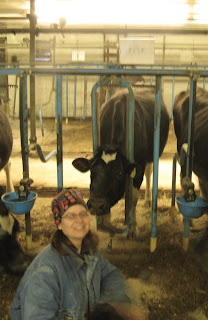 I heard that I was the second Rose to visit in as many days who
insisted on a photo with this cow. She looks like she's trying to
sniff me, but she's actually trying to back away. Sorry, Rose!

My sister-in-law gave me this jacket to wear. It was huge and
the buttons kept coming undone. My brother, Mike, later told
me it was my dad's jacket. A perfect barn coat, b'gosh.
Posted by bikegirl at 3:40 PM

I love cows and did an installation years ago called "Udder Nonsense." We painted an old reservoir with black and white cow spots and cleaned it from all of the LA graffiti. I contacted a local farmer and she was wonderful to lend us her cow, Daisy for the day. We picked her up and my friend built this extensive ramp for Daisy to descend (which she did with some hesitation however!) But, once in, Daisy was a great hit with the kids and onlookers. Daisy was glad to go home though and mooed into her truck at sundown. (Thanks for the memories Rose!)