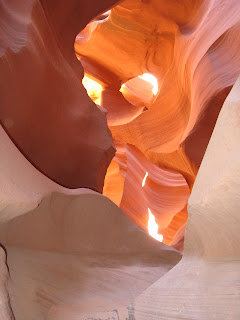 Slot canyon near Page, AZ
Yesterday I returned from a week in Wisconsin, where I visited with family, celebrated my mom's 87th birthday and got reeducated on Wisconsin's politics. Jon met me at the airport and we headed home. I was yawning most of the way having not had much sleep the night before as I was engrossed in a book and, once asleep, sleeping fitfully as I worried that the alarm wouldn't go off at 6:30 a.m.

After unpacking my bounty of cheese (through which the TSA had rummaged then not put away as tidily as I had), we lounged around the house before deciding to go to the movie at the Bear Tooth. The movie: 127 Hours. You know, the one where Aron Ralston is trapped by a boulder in a slot canyon and must amputate his arm with a dull knife or die.

We've hiked in a few slot canyons in southern Utah and Northern Arizona. They're intriguing, sometimes magical-feeling places - once you get over your claustrophobia and fear of getting washed away in a flash flood. I even remember climbing over a boulder that was wedged in a tight canyon. We had to climb over it to lower ourselves to the next level. It was very similar to the one in the movie and I remember worrying that it would roll over me. A guy we know was in line next to us and said that in the canyon country, they now call them "Ralstones." Hmm. Not such an unreasonable fear after all. 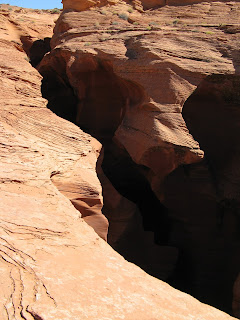 Slot canyon near Page, AZ: from the surface, it's just a crack in the rock... 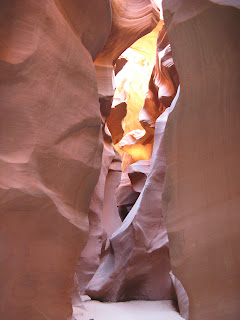 but when you climb in, it's an earthen maze.

Spoiler alert ahead!
Aron gets trapped early in the film, yet the director took the time to show us a character who was adventurous, but also self-centered and careless. Nobody knew where he was because he didn't give anyone an idea of where he was going. Pilots know: always file a flight plan. That's good advice even if you're just heading out for a dayhike, I guess.

When Aron finally gets serious about cutting off his arm, he first breaks it, knowing he can't cut through the bone with the cheap knife he's made more dull by chipping away at the boulder with a delusion that he can dislodge it. The toughest thing to cut is the nerve and I had to look away each time they showed him attempting to go at it. Awful, awful! But then, as we know, he gets out. He wrapped the stump of his right arm and is heading down the canyon where he then rapels down to a water hole. He's drinking the rank water from a pool. That's when I heard something and looked to my left.

Jon's head was tipped back as if to look at the ceiling. I thought he would be sick. I pulled his empty beer glass closer and reached for his head, looking at his eyes. They were rolled back. He was out. Oh shit! I was saying his name as Aron walked away from the pond to his new life. "Jon, Jon." He wasn't moving so I just started calling out: "Doctor." I was close to panic. Louder: "Doctor, is there a doctor?" What if it was a heart attack? I know he's healthy, but these things happen.

Soon we were surrounded by people. A nurse reached for his wrist to find a pulse. Someone asked me what happened. They got him to stand up and walked almost as a unit to the lobby while I collected our jackets and found my bag which had dropped to the floor. I left the uneaten pizza on the table and followed.

Someone had already called 911. Jon was in the lobby sitting on one of the benches as the doctor and nurse questioned him and checked his pulse again, consulting each other on what they thought it was. The movie had ended and people were walking out, looking. Gerald, the physician's assistant who works for our doctor showed up to see what was happening and he stayed with us as the medics arrived and checked Jon. But they wanted to take him out on a gurney. "Do you have to?" Jon asked, insisting he could walk. They loaded him up and wheeled him out.

In the parking lot the doctor gave me her card. (She had told me she was a pediatrician and I assured her that this was the perfect doctor for a middle-aged guy. Sorry, it runs in my family to joke at serious times, ala Dr Hibbert of the Simpsons.) Gerald told me we were doing the right thing by going to the E.R., and I agreed, if only to make sure there was nothing serious wrong.

Jon and I got to the emergency room at about the same time. When I went into the room, he was hooked up to a monitor, answering questions posed by the nurse. When he had a free moment, he asked if I'd gone back in for the pizza. "Sorry," I said. "I knew you'd be thinking about that."

The E.R. doctor gave the same diagnosis as the pediatrician. Pretty simple: he had fainted. The discharge instructions say that these vasovagal symptoms "may be brought on by emotional distress, pain, dehydration, bleeding or medications effects." They might add to the list, watching a movie that includes a graphic scene of someone amputating his own arm. If you go to the movie, which I still would recommend, be sure to have some water on hand and a little hand-held fan. If you feel faint, don't stand up. And don't be surprised if someone calls for a doctor.

In doing a little research, I've learned that Jon isn't the only one who has fainted at 127 Hours. It's a pretty powerful scene. Had I known, I still would have gone to the movie, but I may not have reacted quite so drastically to his fainting. Or, maybe I would have, because you never know. Either way, I can't wait to see the questionnaire from the insurance company asking Jon to explain this incident.
Here's what Ralston and the actor who plays him, James Franco, say about how to watch the movie.
Posted by bikegirl at 6:26 PM

That explains why I feel paralyzed walking through life most of the time.
Glad Jon is fine......!! What a scare.

I had the same experience the first time I watched 'The English Patient.' It was the scene where Willem Defoe's thumbs were cut off. Not only did I get the ER visit, later I had a 24 hour heart monitor to rule out anything more serious. When I went back to see the rest of the movie, I went to the bathroom during that scene! Now in similar situations, I never watch and always ask Paul to tell me when it's over so I can look.

Jon, I smypathize with you, I have the same problem when I see blood on screen. I can remember in High School nearly passing out watching a first aid film about stopping bleeding from a spurting cut. Ironically a friend had asked me to accompany him to that same movie that night. I declined quite emphatically when I heard the subject matter. When I asked him about it the next day he said there was some excitement when somebody had a heart attack of something! Glad you are well!

I'm glad he's fine, too. I'll remember this next time there's a gruesome scene and try to remain calm.
Corinne, I saw The English Patient but don't remember that scene; maybe I had my eyes covered.

You probably fainted temporarily and don't remember that scene! It's not even that they showed anything - I started fainting just from the idea of it. I get weak reading some stories in the news and when NPR warns about graphic stories, I assume that I'm one of the people who's going to want to turn the channel.

I used to bike in Fairbanks to UAF... $69 Walmart bike.. Muhaaahhaaaha.... then somebody stole it & I was walking again.