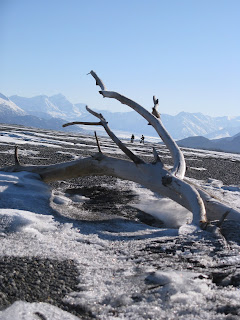 Alan, Jon, glacier, driftwood.
We thought we could make it to the Knik Glacier and the route seemed promising at first. Firm ice on a mid-20 degree day with the sun radiant in the early March sky. The conditions we hope for in the last days of winter. The conditions we sometimes forget to hope for while enduring 20-below (or colder) days or rainy 40-degree days in the middle of January's darkness. And there we were: Jon, our friend Alan and me. On our studded tires headed up-river. 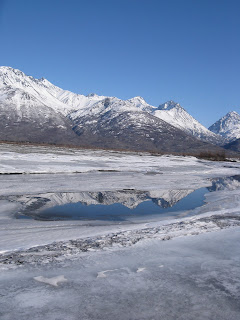 Open water.
I wasn't in a hurry and kept noticing shapes in the river ice: rocks and pebbles encased in more than a foot of solid ice; patterns of sastrugi, the snowdrifts of earlier in the winter eroded by winds that blow from the glacier, carrying fine particles of silt that land on the drifts, coloring them gray. Adding a gritty layer to the ice. 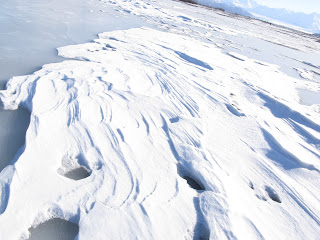 Sastrugi (The glacier is in the far right corner.)
Jon called out to me as I sat on the ice with the camera in my hand. I was so easily distracted that it's a good thing there was no open water right next to that section. I was focused on all the rocks, I told them as I caught up. "I guess you don't need any mind-altering chemicals, do you?" Alan asked. I guess not. Is that what it takes for people to enjoy just looking at one thing for more than a minute? Because I could have stayed in that one spot for another 15 minutes looking at the rocks and the ice patterns as they caught the noon-time light. As my body absorbed the heat. Instead, we continued. 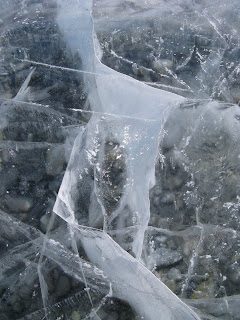 Looking through a window of foot-thick ice.
We followed ice shelves on the river bank; we rode over miles of gravel bars covered with fist-sized river rocks and small pebbles; we plowed through low, crusty snow drifts that made barriers across our route. We got off and walked. The glacier appeared closer and closer, but only in small increments. Our tires sunk into a mush of pebbles and silt as the ground softened in the afternoon warmth. We decided to declare that, for this trip, the journey was its own destination. 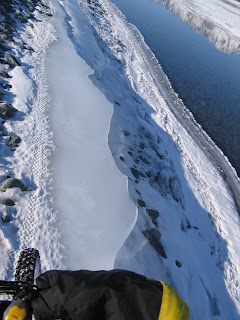 don't break, don't break
After lunch, we turned around and followed our tracks back. Or we forged new courses, taking whichever route each of us preferred. Sometimes riding together; sometimes separate down the expanse of the valley. Me, riding slower, taking the time to look around. Thinking about the abuse I'd just put my studded tires through, feeling a new roughness in my bottom bracket - or was it my rear hub? Feeling a tiredness in my quads from riding out of the saddle on the roughest stretches. Relieved to arrive at each icy section for the smooth ride, even if we did have to pedal through dozens of crescent-shaped drifts that were spaced at intervals across the ice, another product of the winds that frequently blow down the valley from the glacier.

The sun was blocked by a mountain as we neared our entry/exit point. Our studded tires dug into the slushy top inch of the ice, breaking through enough that it released a slight whiff of methane that had been trapped under the ice as plants decayed in the mud.

It's nearly the middle of March. The days are getting longer. We haven't had snow in nearly three weeks. In many places the trails are hard-packed and fast to ride. In some parts of town, things are melting. March. This year it seems to be a most magical month. 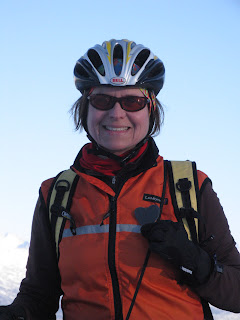 Wow--thanks for the amazing pics and inspiration. I am happy that you don't let the conditions keep you from getting out.