sometimes it's best to turn back 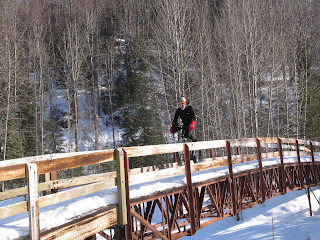 Jon levitating across Resurrection Creek.
If the ride starts to suck, turn around.

I'd heard from a friend that Resurrection Trail was pretty nice to ride. He'd biked from the Bean Creek trailhead near Cooper Landing up to Juneau Lake. Great conditions. So I started thinking, I wonder how the Hope side is. As it turns out, not as nice as I'd hoped.

Jon and I headed down on Thursday, making the drive around Turnagain Arm to get to the trailhead. The road hadn't been plowed all the way to the parking lot, so we parked just this side of the turn-around, readied the bikes and headed up the road. Before long we were on the trail and climbing. 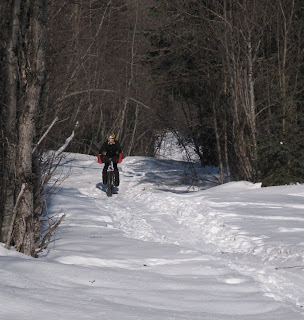 In some places, the trail was smooth & fast.
Between areas of sweetly-packed, smooth trail were long runs where a moose or two had decided the trail was indeed an easy route to follow. We rode the post-hole filled trail for a few miles, enduring the elbow-jarring sections and hoping for improvements. We met a group of skiers who were touring the 39-mile trail over the upcoming three days, staying at a different public-use cabin each night. They would have great conditions. Three days of bluebird skies and perfect temperatures in the forecast. Plus, their skis would glide right over the post-holes while they barely noticed them. For a few minutes, I longed for my skies. And wished that moose was in my freezer instead of on my trail! 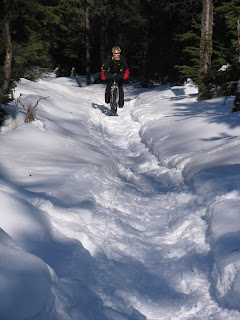 In more places, the trail was trampled and jarring.
As we rode alongside the creek, it got worse. I stopped and waited for Jon. We had to decide whether we wanted to endure or find a better place to ride. Jon admitted that he had taken me on rides where I was hating the conditions and now he seemed to be hating this trail even more than I was. The decision was mine. I rode up the trail another hundred yards or so. No, I told him, this would be great except that it really sucks. So we turned around. The pounding continued, yet we enjoyed stretches. At the top of the final long climb, we sat in the sun to share a thermos of tea and a snack. 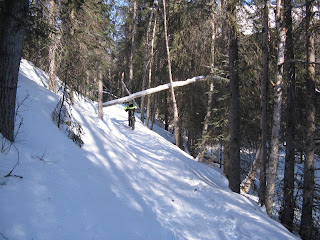 A smooth climb.
Back in the car, we debated where to go: I was up for sitting in the sun somewhere enjoying a coffee. Jon thought Twenty Mile or Portage. We drove on. At Johnson Pass, he suggested we try those trails. I waited in the car while Jon checked out the trail entrance. He could see a few bike tracks that barely sunk into the hard-packed snowmachine trail. No sign of moose. Soon we were back on the bikes riding a pump-track descent of rollers (aka, whoop-do-dos) until we reached a creek. At a stream bank, we dropped onto a snow-covered creek and turned right but soon turned around when we approached open water, doubling back and riding up-river.

A mountain blocked the sun and the temperature dipped to 10 degrees as we followed the creek upstream. Soon we saw a bridge over the creek and knew we were almost to the summer trail. A trail whose dips and turns I recognize in the summer was now again turned into a series of rollers that climbed the narrow trail alongside a snow-covered marsh.

The air was still and cold. We heard a few birds, but couldn't see them. Not a cloud in the sky. I looked down at my watch and it was already 5:00, our turn-around time. We retraced our route to the trailhead, satisfied that even this short ride could redeem the earlier experience. 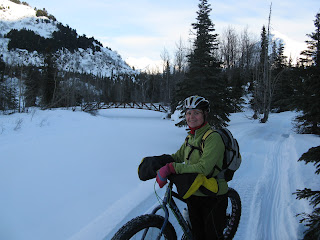 Is this Center Creek or Bench Creek? Either way, the
snowmachine trail hooks in with the summer trail just behind me.

Part of what I love about the winter riding experience is the feeling of adventure and exploration. Sure, somebody has been there before me, but I love being on a trail for the first time. Wondering what the conditions will be; what I'll find next; hoping I can take the right turns and find my way back before dark. The other part is seeing how much of a trail I can ride in the winter. Thursday's ride got me wondering whether we could have biked the entirety of Johnson Pass trail, or at least make it to the pass without being turned around by avalanche fields or too many downed trees. Something for next time.
Posted by bikegirl at 8:01 PM