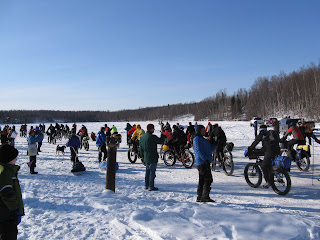 3..2..1.. go!
Last Sunday I decided at the last minute that I'd drive out to Knik for the start of the Iditarod Trail Invitational. I'd never gone to the race start, but a few people I know were racing and I wanted to see them off. I also figured it was a sunny day and besides taking a few photos at the start, I could check out some of the trails on the Mukluk.

As I made the drive toward the Susitna Valley, wind blew snow across the highway causing near whiteouts for a few miles. Above the blowing snow the sun cast its light on the mountains around me. I hoped it wouldn't be too blustery at the starting line.

I surprised our friend Pete who'd arrived in Anchorage from McGrath (the finish line of the race) just the day before after having his previous flights canceled. He's teaching in the small Kuskokwim River town this year so we haven't seen him much. Pete's bike carried minimal gear compared to the other racers, the sign of a rider who's done the race a few times. Next, I found Louise (Lou) and Eric. They're Pete's friends from California who stayed with us last year before and after the race. I got to see them off after inviting them to stop in when they get back to Anchorage. The start area was crowded with racers and well-wishers. Every time I turned around I heard a voice or recognized a face. It was sunny and windy, with a twinge of nervous energy floating around. 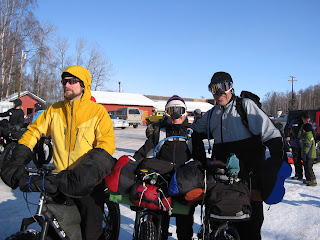 Pete, Lou & Eric.
If I'd arrived a little earlier, I could have biked up the trail and photographed the racers as they streamed by. I thought maybe I could ride with the back of the pack up the trail, but I would never see my friends after the start; even loaded with survival gear and food, they're all much faster than me. Then I ran into Mike Curiak and Steve Tower.

Mike stayed at our place last year, too (the house was full of people!), and rode the trail all the way to Nome, self-supported and without entering any buildings. You can see his videos here, presented in three parts. This year, Mike was the official photographer, biking and shooting pics all the way to Nome. Steve's wife, Janice, was in the race so he was riding out to one of the lakes with Mike to see her on the trail. They good-naturedly didn't object to me tagging along. 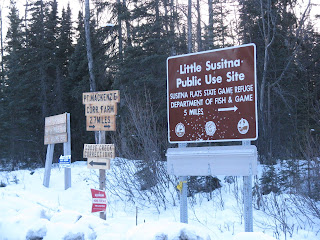 Ride past the prison farm and where the road ends, just keep going...
We drove to another parking area, then pedaled a few miles on a road before getting on a trail that follows a buried pipeline. Steve explained the route, but it was mostly a straight shot that dropped down a bluff to cross a river, then climbed out again. I was riding along a snowmachine highway through an expanse of spruce, getting ever closer to Mount Susitna (Sleeping Lady), watching as Mike and Steve became ever smaller moving dots of black against the snow. Wind blew across the areas that didn't have trees, creating gentle drifts across the trail. 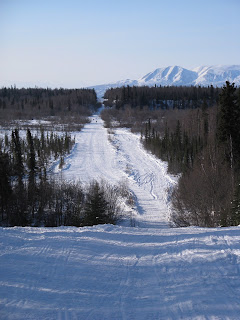 Steve & Mike are way out there, about to cross the Little Su. 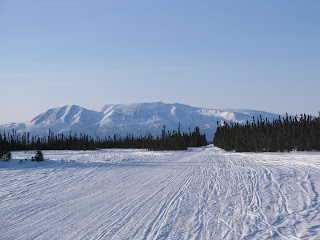 Sleeping Lady and a perfect trail beckon.
Just after 3:30, I decided I should have a snack and turn around. I hadn't seen any riders and there was no chance of catching my guides. I wanted to get back to the car before darkness fell so I wouldn't be riding the road with no lights. I ducked behind some trees and pulled out a snack and some hot tea. My right cheek was chilled from the north wind. I pulled out my phone and called Jon at the shop to tell him where I was. Nothing to worry about. I'm turning around, I told him, but if Steve calls and wonders what happened, tell him I'm okay. Then I turned around and started biking back.

That's when I saw the first group. I recognized Pete's gold-colored jacket at the back, then his friend Greg in the front. Soon they were gone and I rode on, encountering more cyclists chasing the leaders down the trail. A few people I knew, others I wasn't sure. But I imagine they were surprised to see a lone cyclist out on the trail just taking photos. 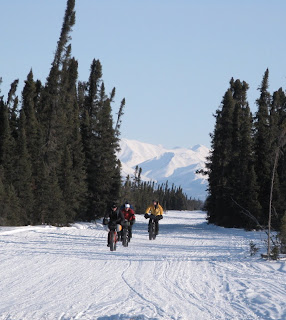 Greg and Pete with three other riders. 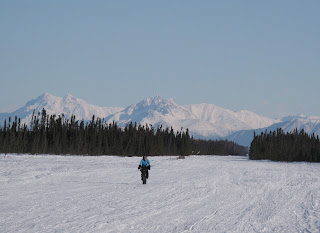 Janice crosses the expanse.
For the last several days, I've followed the progress of the racers as they've moved from one checkpoint to the next on the 350-mile course. I've been reading the updates and talking with friends. I've been amazed at the winners. When I was out there last Sunday afternoon, a part of me wished I had been joining them on that long ride to McGrath. Maybe some year. Or maybe I should just do a few overnight winter bike trips. That should satisfy my need for adventure. That, or just read the rider accounts. 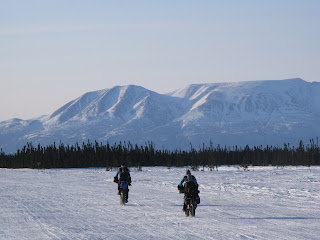 Eric and Lou. She's off to set a new women's record.
Posted by bikegirl at 6:00 PM