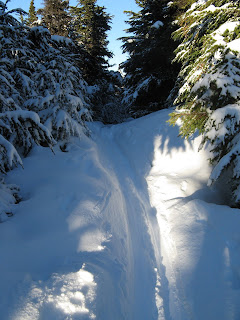 My idea of a perfect ski trail.
I ski the way I bike. By that I mean I prefer skinny trails that are less traveled than the pristinely-groomed, often-wide ski trails laid down by the local ski club. Don't get me wrong; I do use the groomed multi-use trails, sometimes even for skiing. But typically I'll use them to get from one narrow trail to another, connecting the dots between one technical experience and another while on my snow bike.

And that's how I ski, too: use a wide trail to get to a narrow one that twists through the birch- and spruce-forested park. Or branch off cross-country to explore off-trail (something I can't do on my bicycle). Two of my favorite ski experiences of last year were off the Powerline Trail in the front range of the Chugach Mountains that climb from the foothills on the east side of Anchorage. (You can read about them here and here.)

Powerline cuts through a wide valley and is heavily traveled, but once you leave the trail and cross the Campbell Creek, you could go the rest of the day and encounter no other skiers. While enjoying brilliant spring skiing last April (yes, April) I realized I wasn't properly equipped for the outings that I loved the most. So I started shopping. Rather, I started asking questions: what gear should I be using? Because what I was using just wasn't cutting it in the backcountry. 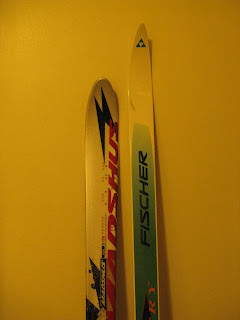 New backcountry ski (left) compared to my mid-90s classic.
I was skiing on the classic "touring" skis I'd purchased the first winter I lived in Anchorage. They were the first skis I'd ever owned and marked my commitment to living here. I would embrace the winter, I had told myself. And I did. But I found that the groomed and tracked ski trails that my membership to the ski club promised were just not my cup of tea. I'm not that good at skiing but after a while I found the groomed trails to be uninteresting.

Which brings us to this winter.

At Christmas Jon gave me a gift card to my favorite ski shop in town, Alaska Mountaineering & Hiking (AMH). There I found most of the backcountry equipment I needed (though I did find boots that fit me better at REI). I bought my gear, then waited for enough snow. Through the melting of early January; through the deep freeze of the middle of the month; then, finally we began getting some snow cover. Friday, February 4, began cold and clear. A calm, perfect February day.

In the early afternoon I gathered my gear and headed for Glen Alps where a few people had packed down the Powerline Trail. Instead of heading up the shaded valley, I skied down toward the city. I watched another skier carve into the snow as he swung onto a trail that ducked into the trees. Then I pointed my skis toward the same trail.

When I pushed off, the metal edges cut into the wind-crusted snow making the turn so much easier. I could snowplow a little to slow my speed, my ankles stable inside the higher boots. Then I headed onto a narrower, singletrack trail. The skis, with their hourglass shape were stable and, again, I could take the tight turns a little better. 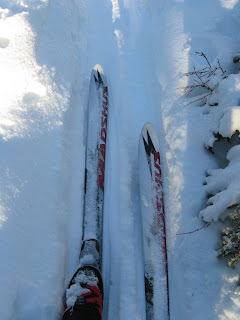 They handle great!
That first outing was kind of a short one, but I spent some time practicing turns on the descent before climbing back up to the trailhead. If we keep this good snow, I have another way to enjoy the winter with better gear for the backcountry. Don't worry, though, you'll still see me on my snow bike.
Posted by bikegirl at 9:10 PM

The 'backcountry' trails are great again after snow yesterday early morning. I look forward to skiing with later this month. ~corinne