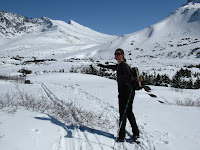 Corinne shows the way.
Last Friday, a few days after a couple inches of fresh snow landed on Anchorage, my friend Corinne & I did a little ski in the front range. I knew from Jon that the conditions were perfect since he had done a ski from Glen Alps to Indian with a few friends just the day before. He'd returned home with the afterglow of a great ski so I knew I'd better get up there before it was gone. I'm glad Corinne could join me (I love when my friends have the same day off) because it's always more fun to get out when in the company of an adventurous friend.

We left the trailhead in the early afternoon, skiing up the Powerline Trail under bluebird skies. Other skiers and snowshoers were out, but few ventured off the main trail. We cut across the valley, following a couple sets of tracks as we headed for Ship Pass and Hidden Lake. In the warm sunshine, I skied in a short-sleeved shirt as we climbed up-valley. 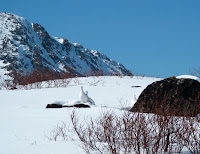 Three ptarmigan near Hidden Creek,
still wearing their winter white.
We forged our own route for a while, investigating small mammal tracks that sometimes disappeared under wings that had left their own imprints in the fresh snow. We wondered at how short journeys to collect cached seeds and berries ended so abruptly as the little creatures were lifted into the sky. A simple trip to the market, then, gone!

Soon we joined a trail where we came across one, then eventually six ptarmigan. They didn't seem to mind as we played paparazzi for a few minutes while they ran across the trail, then in a series of loops between the brush and a large boulder. Some of them displayed a few brown feathers in anticipation of the upcoming season. We continued climbing farther up the valley before deciding to rest and have a snack while perched on a rock and lichen-covered outcropping. Sunny and windless, we were in no hurry.

We made our return trip, switch-backing down a steep slope filled with low trees and shrubs. A ski I suggested might take a "couple hours" turned into a full afternoon in a sunny valley. I'll never regret trading an afternoon at the keyboard for an afternoon of perfect conditions and good company. 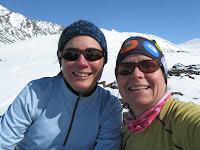 Corinne & I soak up the sun.

Today, after four days of cloudy skies and blustery wind, we woke this morning to falling snow and at least five inches of the white stuff already piled in the driveway. I know that in mid-April this isn't unusual, but I was ready to park the skis for the season. Now, maybe I'll consider one more outing. Maybe I'll pull out the snow bike. Maybe I'll go for a walk in the slush. Or maybe I'll do my chores and occasionally glance out the window and laugh.
Posted by bikegirl at 11:04 AM

That was fun - and it looks so sunny compared to today when the wind is back up and the skies are slate gray again. I hope to download my photos this weekend and maybe even write a blog post. Thanks again for getting me outside!