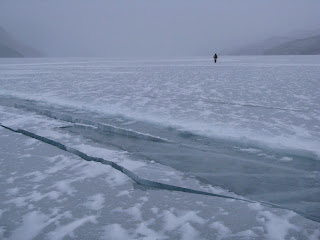 After Monday's misadventure, I needed a redemptive ride. Weather reports called for warming temperatures, snow and even blizzard conditions for Wednesday. But is was also Jon's day off and possibly our last chance for an adventurous ice ride this season. After seeing a friend's photos of skating on Kenai Lake, we were sold. We had to go.

We loaded the car, picked up our friend, Alan, and headed south. As predicted, the wind was blowing in Turnagain Arm. Some snow was falling in the pass, but it was much warmer than it's been in a couple weeks, almost 20 above zero. We parked close to the Forest Service office on the lake's eastern shore and began getting ready. I was sitting in the front seat putting on my boots, but I had the car window open so I could listen to the sounds of the lake.

The ice was thumping like the bass in your neighbor's car stereo, but more drawn out, moaning. Two skaters headed for the ice and skated toward the center, quickly disappearing into the snowstorm. A few minutes later we heard a long rumble and a loud, explosive boom that sounded for several seconds, much like the sound of an earthquake whose epicenter is very near. I saw masses of ice rock when it broke, heaving the ice up, then back down, splashing water to the surface as it shifted. Some sections of ice were still rocking or shifting a minute later.

We couldn't see the skaters and once the ice stopped moving, we decided to go ahead with our bike ride. When I say "decided," I mean we didn't really discuss it; we just kept getting ready. We rode a short distance and came upon what turned out to be the main break in the ice. Alan stepped across and took off riding (that's him in the first photo). Jon rolled his bike across the wet gap then made a small leap over. Skeptical at first, I followed by aligning my bike across the break then using it as a pole vault to leverage myself across.

The skaters hurried back but had gone north around the lead to get to shore. We continued riding toward the western arm of the chair-shaped lake, keeping somewhat close and in-sight of the north shore as snow fell and blew around us. The gray-scale day was only brightened by some of our colorful gear: jackets, poagies, mittens. 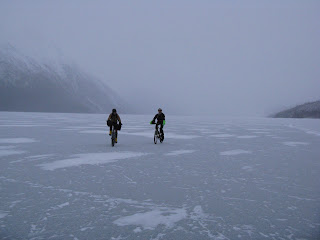 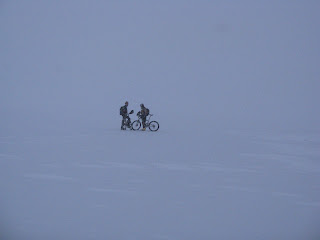 Jon and Alan in the blizzard.
After following the north shore for a few miles, we turned around, crossed the lake, then following the west shore of the south leg of the lake. At one point during the crossing, I placed the camera on a thin layer of snow and set it to record in film mode, hoping to catch the continued groaning of the lake ice, which sounded like a distressed monster that was sometimes tapping the underside of the ice. The camera rolled, catching Jon and Alan and millions of falling snowflakes, but no ice sounds. We stopped to explore a campsite situated across the lake from the Forest Service office, then continued toward the Primrose trailhead where we had some snacks and hot tea. 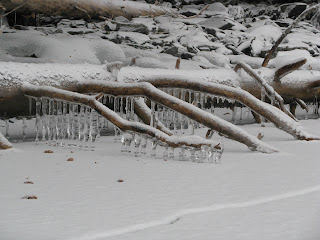 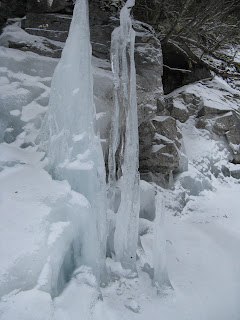 The return trip over some refrozen jigsaw puzzle pieces of ice reminded me that the lake can break up any time, especially when the weather changes as it did on Wednesday. We pedaled north, following the eastern shore back to where we'd started, checking the open water before finally ending the ride.

We learned later that the skaters (or at least one of them) worked for the Forest Service and had just gone out for a lunch-time skate when all ice broke loose. The story even made a local online paper. Guess they didn't notice us riding out there. Or maybe they shook their heads when they saw us and hoped that we wouldn't need a rescue. 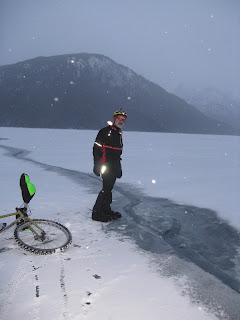 Jon at the open lead as our ride ends.
I sometimes wonder at things I've done. I don't think of myself as a risk-taker; in fact I think I'm one of the most cautious people I know. And, despite the ice break, Wednesday's ride didn't feel risky to me. I was with two other people. We had rescue gear and there was little chance of an avalanche pouring onto the lake to further disturb the ice. I felt more nervous on the drive home to Anchorage in the blowing snow on the Seward Highway. More people have died there.
Posted by bikegirl at 10:53 AM

Great story, but definitely disconcerting! The winner of the 1986 Yukon Quest died with his dogteam on Lake Labarge in Canada after they fell through the ice, so I've always been a bit nervous when I see those big cracks and lake flooding. Glad you made it across!!