another snowstorm, another ski 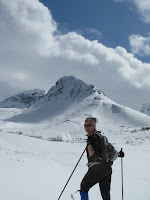 Making tracks.
Headed toward Hidden Lake.
Sure it's the end of April and most people had put away their skis for the season, pulled their road bikes off the shelf, aired the tires and turned their handlebars toward the Seward Highway. But last Friday, riding the coastal highway south of Anchorage was among the last things I wanted to do. With the Thursday snow storm, a fresh coat of snow in the mountains drew Jon and me once again to Glen Alps. 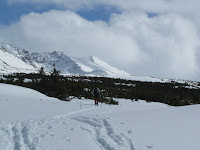 Jon follows some earlier tracks.
The snow was a bit sticky. 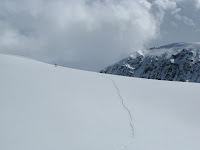 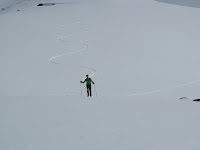 Tele-turns his way down on his classic skis.
Short sleeves & skiing! 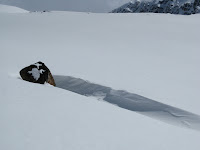 Prevailing winds.
Snow started falling as we made our way through a maze of trees back to the main trail as more people were heading out on skis or on foot. Our timing was perfect. We'd gotten just far enough out there that we felt we had the entire area to ourselves.

I imagine the valley was filled with skiers on Saturday when Jon and I were working. Lucky us to have had it to ourselves. Next time I'll remember the sunblock.
Posted by bikegirl at 2:44 PM