A few weeks ago, I received an email from a young Australian cyclist I'd helped out in the shop during the summer of 2008. Mike and his friends had planned an epic adventure in the Americas. Two of them would pedal from Prudhoe Bay, Alaska to Tierra del Fuego, Argentina. The third one would ride as far as he could before he had to return to his job in Australia. When they arrived in Anchorage for the start of the trip, their bikes were waiting for them. After a few hours working on final details, they rode away in the rainy afternoon to begin their trip. 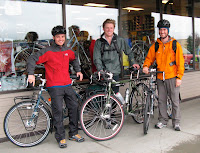 Remember these guys?
Rob, Andrew & Mike with new Long Haul
Truckers before their adventure began.
The message I received from Mike was that he and Andrew had arrived at their destination two weeks earlier and he was now back home. That must feel strange after living on a bike for a year and a half. Andrew was still in South America. Through Facebook, I could see some of the photos of their journey. One bike had a different wheel than they started with; one, a different handlebar. One pair of shoes was taped together after the long journey. One photo showed mud halfway up to the hubs of the Long Haul Trucker. Strangely, that's the kind of photo that inspires me almost as much as the scenic shots.

By coincidence, the night before I received the message, Jon had just finished building my new touring bike. A Salsa Fargo. It's a mountain touring bike, so it can go anywhere. I took some parts off my 29er (wheels, brake rotors) and added some new parts, then waited for the right conditions so I could try it out. Tuesday we had the right conditions. A sunny day, snow melting, a report of dry pavement near the airport. It was time to take it out. 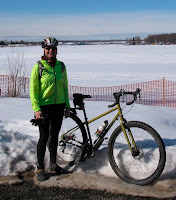 The Fargo, designed to go far.
After scavenging a few more parts, like pedals from one bike and a saddle and seatpost from another, plus a fender just in case, I was ready to go. I met my friend Lynn near Lake Hood. It was still snow-covered but with only a few planes still parked on it. From there, we headed off.

The first ride on a new bike is always about the dialing in things like the seat fore-and-aft, the angle and the handlebar reach. We rode around the lake, then west on Northern Lights Boulevard beyond the airport, and I made small adjustments along the way.

The thing about this touring bike is that it can have so many applications, from riding around in town, to mountain biking, to long, self-supported trips. That last one is the reason to have the bike. To load it up and just go. I've even thought I should just start out by taking it down to a campground along Turnagain Arm - after it warms up, of course. Doing a little Alaska touring. One has to start somewhere, right?

I have a short list of places I'd like to tour, including the Continental Divide and some overseas locations. For now, I'll enjoy riding it around town like I did today when I needed to visit the library. Riding through puddles and thinking about where Jon and I will go. All those miles in our future.
Posted by bikegirl at 5:14 PM