In an effort to clear the clutter from my brain, on Saturday afternoon I headed out for a bike ride in the park near where I live. I wanted to link together all my favorite winter trails, well, most of them, and because it was mid-afternoon, the temperatures had warmed up to the high-30s.

Most of the snow trails I rode were bomber: hard-packed with a glazed crust on top, though not so icy that I was slipping around. In other places, out of the trees, a layer of slush had developed during the day. A few stumps that were buried most of the winter were now exposed. And in one spot, the trail had a touch of bare ground where a tree root was exposed. The winter riding days will soon be coming to a close.

Another sure sign that the winter season is almost over, last night a friend who loves to ski said she's sick of skiing. She wants to ride her bike on the road (she happens to not do much winter cycling). Apparently lots of people are ready to be done with winter so they can ride their bicycles, because they're showing up at area bike shops, at least that's what Jon told me. Paramount has been a busy place since about the middle of the month, and that's great news for the upcoming biking season. Especially after last year.

Last year Paramount had their slowest March since opening in 1998. Typically, March and April are the busiest months of the year as people gear up for summer cycling. In fact, it's always interesting to hear about retail economic predictors which are so focused on the Christmas holidays. For the bike business in Alaska, even with the growing snow-bike business, Christmas is a blip. March and April will tell you what the year is going to be like.

That's why last March's low numbers were a big concern. I was still working at the shop, and we were trying to figure it out. People weren't buying. They weren't even shopping. As the season progressed, we realized that people in Alaska were finally feeling the effects of the economic downturn. Or, at least they were worrying about it. You can talk about competition from other stores, but that's not enough, especially after the previous March had been the busiest on record. There was something else at work here, too.

In 2008, Anchorage had one of its rainiest, coolest summers on record. But gas prices were over $4 a gallon. So people cut down on driving. They were buying commuter bikes; adding fenders to existing bikes and rain gear to their wardrobes. They were biking to work so they could save their gas money for out-of-town getaways. They were stay-cationing in Alaska.

By contrast, the summer of 2009 was one of the most beautiful we've seen in a couple years, and gas was a dollar lower. Some people kept up with their bike commuting, but lots of them got back into their cars and SUVs and returned to their old habits. Never mind that continuing to save money is a great idea during a recession or when you're worried about your 401(k).

If March is truly an indicator for the mood of consumers this year in Anchorage, I'd say we're on the road to recovery; people are optimistic about their financial futures. Could warnings about staying active help? Sure. As does the passage of the Bike Plan which recently came before the Anchorage Assembly. (I did hear the plan has been recalled to discuss one specific pathway, but I'm sure the approval will stand.)

I hope Paramount and other shops have a good year. It says a lot for a community to have this kind of vibrant bike culture where shops are locally owned and so many people buy locally. Busy bike shops means more bicycles that I hope people consider will riding more than they drive their cars. Since I haven't been commuting to work (a friend suggested I get up and ride around the block a few times before returning to my home-office), I admit to feeling a little out of touch with other cyclists. Never fear, one ride through the slush and ice along Tudor Road last week and I felt the kinship! 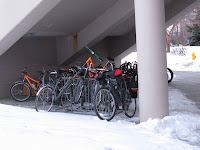 At the Loussac Library - full bike racks
on the night of the assembly meeting.
During the second half of my ride yesterday, snow began to fall in oversized clumps of flakes. It turned to sleet just as I decided to ride Blue Dot trail. Water dripped from the brim of my helmet onto my nose. My shirtsleeves were getting wet but it was too warm for a jacket. It was a perfect day to just spin a big loop around the park. When I was done, my head was clear and my legs were tired. A perfect ride. Happy spring.
Posted by bikegirl at 1:11 PM