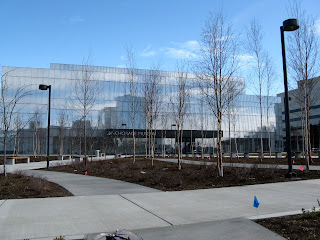 Soon-to-be-green space west of the museum.
I didn't get up on time Sunday to be at the Anchorage Museum to see the new sculpture by Antony Gormley as it was installed on the corner of Sixth and C. With a busy weekend (now that I'm working weekends again) it hadn't been on my radar. So, when I made a lunch date for Tuesday to meet my friend Lynn, I suggested Muse, the cafe' in the museum. I pedaled the singlespeed from the East side, to Midtown, then finally to the museum, arriving right on schedule despite some detours due to slush that still covers parts of the paved trails.

After lunch (oh, delicious blt with lox!) and a cappuccino, we strolled outdoors into the early afternoon sun. We had a surprise visit from our friend Kim who works across the street from the museum and came out to say "hi," then we moved on to look at the sculpture.

Habitat. It's grey; made of block upon block of steel. Looking south, contemplating what? The birch trees that were transplanted last year? The city as it has grown, pushing south since its early days as a railroad town? People walking by? That Anchorage is now home to a work of art by Gormley says something about our city. Taken as a part of our museum expansion that includes a grassy park filled with trees right in the heart of downtown, this 1 Percent for Art speaks to me about what our city can be. So contemporary, yet connected. Active and contemplative. It says, "Here we are!" 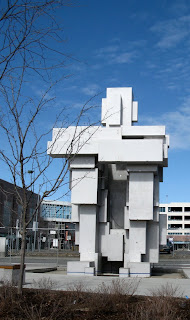 Habitat
I guess some people have tossed around some criticism about the work, but maybe they need to be in its presence, to really look at it and think about it. To think about what it means; what it could mean to them. To me, it is a thinking figure, an appreciative figure, maybe a guardian. And the name, Habitat, well, this video on the ADN site is insightful. That's one of the great things about art, it can mean different things to different people or even different things on different days.

Habitat is behind a fence until they finish the installation (in about two weeks) but as Lynn and I were looking at it, a worker unlocked a gate and began opening the fence so a pro photographer could take some shots for the artist. I asked if I could take some as well and she kindly said I could go inside. Later, when I told her my idea for a photo of me, she agreed to take a couple. She was very nice and allowed a few other people to take some shots. 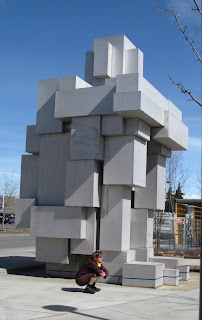 thinking... thinking...
(thinking: the concrete slopes down behind me making
it very hard to not fall backward off my heels!)
The day was warm, hitting 60 degrees for the first time this year. I biked home, winding through the quieter streets, enjoying our eclectic city, noticing the buds on trees just starting to open. At an intersection in Fairview, I ran into someone I used to work with and we biked through the neighborhoods together. Nearer to home, I rang my bell at intersections and people could hear it because their car windows were open. One guy driving a pickup waved and told me to have a great day. This is the Anchorage I love. This is my habitat. 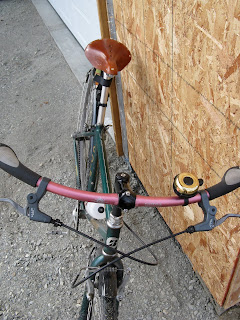 Changed to a different handlebar this
spring... love that big brass bell!
Posted by bikegirl at 12:37 PM

That's the habitat I miss - at times - as well :-) W/ love from Adam in Colorado