thousands of miles away

Despite the snow we got last week, it is spring. Normally the time when my mind turns to one thing: mountain biking. Okay, it also turns to hiking and camping. But this spring, family issues weigh heavily as I try to decide what to do. My mom has Alzheimer’s and I’m not there to help out.

I’ve been thinking about it a lot lately, because it’s been the topic of emails among the siblings for the last couple weeks, but also because we’ve been talking among ourselves about this since earlier this winter. I’ll admit to a bit of denial, but I saw the signs myself last time Jon and I visited. I saw them again this fall.

In February of ‘09, Jon and I visited my parents in Wisconsin and helped celebrate Mom’s 85th birthday. Jon made dinner each evening (except the night my brother Mike cooked) because he loves to cook and she doesn’t. (I wonder if not wanting to cook can be genetic, just like the Alzheimer’s.) After dinner each night, we would sit down to play Scrabble, a favorite game since we were growing up. Dad would sit in his chair in the living room, his walker parked next to his chair, reading or watching TV with his headphones on, looking over with a smile on his face whenever we strayed from playing the game and into the storytelling and laughter.

But, while we kids battled it out on the board, Mom was struggling to make three- and four-letter words. Each play was an achievement. This is the woman who, when we were young, would look at our letter trays and show us what words we could make to get a good score. She was also the fastest speller I know, reciting letters so quickly that I remember asking her to slow down or spell a word again because I didn’t have time to catch all the letters. No need to wonder why four out of 10 kids became English majors. We were fed words. 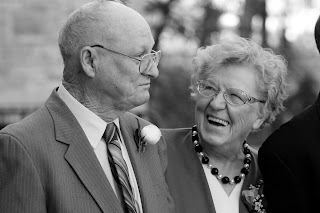 Dad & Mom at Dave (my brother) & Kara's wedding,
November 2004. Thanks, Dave for sending this.
Mom had some tests last year and the doctors said she had Alzheimer’s. Despite the evidence, I tried to not believe it. Then when my birthday rolled around and there was no card in the mail, I became sad that she had forgotten me. (Though as part of a large family, it wasn’t unusual to feel that I was sometimes forgotten.) A card arrived almost two weeks late and I felt a little better. Then Christmas rolled around. We got a card signed from “Mom and Dad.” Things were back on track. On Christmas Eve, another card came in the mail. She’d written that it would probably be late. Then signed it with her and my dad’s first names. Like they’d mailed it to a friend instead of to a child.

I laughed because to me it was funny, but of course, it was mostly very sad. If I’d told her about it, she probably would have laughed, too, because she raised us with her sense of humor.

I never said anything to her about the cards. I try to only have upbeat conversations on the phone. Most calls begin with an apology from her: “You know I have Alzheimer’s.” It’s not a question; it’s more of a statement warning me to forgive every lapse that will happen in the conversation. I give her some slack: “Mom, I don’t remember what I had for lunch two days ago!”

Three of my siblings live within a dozen miles of my parents. They do a lot. Taking them to doctor appointments; helping out when Mom and Dad allow it. My sister who lives here in Anchorage just flew out for a visit. I’ve been looking at airfares, wondering how long to put it off; not wanting to wait too long. Knowing that a commitment at work should mean nothing compared to this. But sometimes I don’t even know what I can do to help. I give advice and make suggestions from here. I try to offer my moral support. I call & joke with her.

We all agree that at this stage, Mom and Dad shouldn’t be living on their own. But Dad refuses to budge - just as he refuses to leave the house with his walker. And Mom, in her more rational moments knows they should live in an assisted facility but in the less rational moments gets upset that people think she needs help. She's beginning to sense conspiracies. How do we steer this?

I suggested to my brother that we need to convince Dad that he must do the best thing for Mom. Because for so many years, she's been taking care of him (he’s been diabetic for 50 years). She’s done a great job, but now he needs to know that it’s about her welfare. Though we also know it’s about his.

So, here we are, a bunch of adults in our 40s & 50s trying to tell our parents what’s best. They insist they don’t need help. But, like a child putting her shoes on the wrong feet, they need help. I told my brother that I'll fly down and help with packing and moving when they find a more suitable place to live. Fortunately they downsized to an apartment a few years ago.

Sometimes I think about what will happen to us forty years down the road. Since Jon and I don’t have kids, I told him we need to remain close with my nieces and nephews, because when the time comes, they’ll be the ones we’re arguing with. Okay, actually, they’ll be the ones who will be in possession of documents we write up that tell them how to tell us that it’s time to not live on our own. Maybe now is the time for us to start a multi-generational commune.

Just a note. I've been trying to say what's on my mind for a few weeks and admit to running away from some of these family responsibilities. So, there it is. I'll let you know what happens. Meanwhile, we'll return to our regularly-scheduled programming. Promise.
Posted by bikegirl at 4:30 PM

Your situation is very very familiar.....a tough place to be when you live far away. My sister and brother were fantastic on taking care of everything when my mother was declining. We sold our childhood house the day my mom passed.

When I would go home I would see the drastic changes in my mom. (funny too, the cards and gifts stopped coming to me in AK) Maybe invite your parents out? My mom came out a few years back and I was so happy that we got to spend quality times together.....

I feel for you but if you have a tight family it will come together. thinking of you!
Katherine

It's tough, not only do most people in our age group have parents to care for but we still have kids coming back home for a year or two at a time. It's hard to stretch things that thin, when someone needs help.

And of course we are also vulnerable to illnesses that say we are no longer young, hypertension, low HDL/High LDL/high Cholesterol, even heart attacks and strokes, diabetes, etc.

I read a story from Fairbanks a while back that I found funny. Seems an elderly man was found standing on a street corner, and a local cop asked if he needed help. "no, just waiting for mom-and-dad to come pick me up." He looked to be 75 or so, so they weren't sure his story was correct, but left him there, and said if they hadn't come in another hour, they be back around, and take him to the station, let him get warmed up and so on. Well the time came he was still standing there, the cops saw him, picked hi,m up not too sure he was all there. But soon another elderly couple cam in to the station and said there son was missing, and mentioned they were going to pick him up from some errand he had run, and they had been late, and he was missing. They described the location, and it was right where they had picked up this other guy. They quickly brought him out and reunited him with his parents.

Still lived at home, mom and dad looked out for him and he looked out for them. Mom and Dad were in their 90s, now. So the cops said why don't you just plan on stopping here next time you are in the area, and Mom and Dad can just pick you up HERE? He agreed, they shook his hand and released him, to go home with Mom and Dad.

So the cop station is now a sort of bus station for making connections, a safe haven in the world where things are no longer safe.

Hope things work out as well for you as for the "boy". Everybody needs some help now and then.