"Silence = complicity"
That's what I wrote on a friend's Facebook wall when she commented on the events that happened over the weekend in Washington, DC. I was referring to our former governor's tweets that failed to condemn the spewing of racial name-calling or anti-gay epithets. Instead, the Incomplete Governor called the Tea-party activists "patriots." And by her silence, she was as guilty as those who uttered the words. 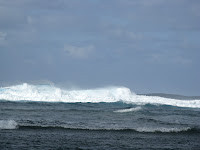 Last night, Jon and I finally watched The Cove, the award-winning documentary (Spoiler Alert...) about a town in Japan and what it does to the dolphins. What we as a human society do to dolphins and to each other. For entertainment, for profit. Much of it was about one man's quest to bring to light the capturing and killing of dolphins. But it was also about unscrupulous business ethics that cause people to sell contaminated food to the public. Paired with the movie Food, Inc. and other movies and books about our food systems, it gave us something to talk about, specifically, mercury levels in seafood.

But here's the thing, the guy in The Cove, Ric O'Barry, who spent his younger years training dolphins has spent the last 40 years trying to get the word out. Refusing to be silent, even admitting that he was part of the problem by training dolphins for the Flipper television series. He admitted he had no idea the problems it would lead to - dolphins being captured, then held and trained for our amusement - and now he's trying to make things right. There aren't many people who are brave enough to step forward and be held accountable for their actions, or even to step forward and have their voices heard on issues that are important to them. But O'Barry has something many don't: a conscience.

I have pretty strong views on things like politics, religion, the environment. (Hell, if it was up to me the polar bears would be allowed vote on whether churches should be tax exempt or whether congress should have to pay for their own health care. Assuming the ballots were printed in a language they could read...) But I don't always speak out to the right people when something is important. Instead, sometimes Jon and I might just talk about it over dinner.

Today, I was thinking about the vote that happened in the House yesterday and the diligence of the people who stepped forward to work on and support changes to health care, including President Obama who would not give up. If you really believe in something; if you really believe that what you're doing is important and will help other people or other creatures and this good old planet, you have to be tenacious. These people are good examples to follow.

With all these thoughts fresh in my head, I realized that I sometimes talk a good talk, but I don't always take the time to do something - such as write and send off a letter to the Powers That Be. Which takes us to this: There's a trailhead I'd like to see the state put in to access the Chugach State Park from the Stuckagain neighborhood; there's the Bicycle Plan that Anchorage has been working on for a couple years that might not be adopted because of the costs. So I sat down and put into words three paragraphs on each topic, spell-checked and reread, then hit the send button.

Mine is just one voice, but it felt good to send out these comments - and certainly it feels a lot better than kicking myself for not speaking up only to have someone later say that nobody supported these positions. And tomorrow? The assembly meeting and a chance for public testimony on the Bike Plan. Hope there's room in the bike rack.
Posted by bikegirl at 10:18 PM

Good points -- I often find myself in the same situation: talking about issues with those around me, but letting others do the heavy lifting. Time to reconsider.