the tracks you leave: Austin Helmers

My memory is a little fuzzy on what years things happen, but I first met Austin Helmers at an IMBA (International Mountain Bicycling Association) trailbuilding school classroom session in Palmer back in 2004 (I think). During the session, an elderly man sat near me and as people introduced themselves, I learned that this was the man who drew a map I'd used for a few years. Now, I had the chance to thank him...

About four or five years earlier, I'd found out about some great riding on the trails of Kepler-Bradley State Park, just outside Palmer. The singletracks wound along ridges and between lakes that were left behind when the glaciers receded. Riding through the spruce, birch and cottonwood forest, the trails twisted and swooped. They intersected with other trails; they connected to ski trails in the adjoining Crevasse-Moraine ski area and wagon paths on the University's experimental farm. There were few signs and it was easy to get turned around. But the park had some of the best singletrack in the area. 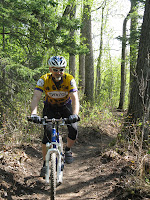 Jon riding @K-B last May.
One day at work, I was talking with a local trail advocate about the maze of trails and how I wished I had a map so I could figure it out. She told me she knew somebody who had drawn up a map and would get one for me. A few weeks later, she brought me a map that had been drawn up by Mr Helmers. When I say "drawn," I mean hand drawn because this was before ordinary citizens were using GPS to map routes. It was the only map of the trails I had seen. Not long afterward, I was working with a ranger to get a permit for a group ride. (In the process, I also learned that the trails weren't technically open to bikes; that would come later.) Mike Goodwin had worked at the park for a few years, but he had never seen the map!

Thus began my photocopying and distributing of the trail map. I'll admit, I was stingy, doling out copies like rations. I wanted to keep the information to myself while we worked to get the trails opened. But Mr Helmers' map was making the rounds. The trails were officially opened to mountain biking and IMBA was planning the 2004 trailbuilding project. They used the map to find their way around and to determine where to have the hands-on school where we would build the switchback.

And that was when I saw Mr Helmers in his element. Though he was in his mid-80s, he was on the trail, lopping branches and doing tread work on one of the hottest days of that summer; a day when people half his age didn't dare complain about the heat, the humidity or the mosquitoes because he was still working. Just over a dozen people put tools to the ground to build a switchback to reroute a badly-eroded fall-line trail. (This IMBA link shows the group: 3rd photo from bottom, Austin is back row, second from the left)

Once the new section was complete, we heaped cuttings onto the steep, fall-line trail we were closing. Mr Helmers stayed until the end. It was my first IMBA-sponsored trail-building experience, but what an orientation! More trails have been built in Kepler-Bradley since that day, but whenever I use one of my K-B maps, I think of the effort Mr Helmers went through to map the trails in the area.

I learned that Austin Helmers died last week at the age of 93. While I'm sad at his passing, I'm comforted that people in the Valley have been working hard to continue building and maintaining great hiking and biking trails. Next time I do trail work, I know I'll remember Mr Helmers and his dedication to making trails that will be enjoyed for years to come. We should all hope we can leave such a positive legacy.
Posted by bikegirl at 10:04 AM