It's tough to write about a vacation while it's in progress. I use the term 'vacation' loosely because, as you know, right now I don't have a job. By choice, mind you. But that is off the point. Which maybe is the point. This is a trip to clear the head. To empty the cobwebs that inhabit the recesses. A vacation should allow cobwebs to fall away. Along with most thoughts of home and work and all the things on the to-do list.

In just over a week's time, I've read about 1-1/2 books. Not much for my vacation reading. Why is that, I wonder. Is it because I have my laptop with me to connect to the world of my friends, family and the daily news of the world? That could be. But I will tell you about the book I did read.

On the plane ride over, I began reading a book that was given to me 30 years ago. That feels like a big forever ago because I was in high school and knew so much more than I do now. My Aunt Maxine gave me the book as a confirmation gift. Confirmation is supposed to represent a coming of age in a particular faith, a commitment, you could say. The book was Anne Morrow Lindbergh's Gift from the Sea. When Aunt Maxine gave me the book, I'm sure I opened it, read a page or two, then put it away. It stayed at my parent's house for many years. Where it migrated next, I don't remember. But eventually, I brought it to Alaska, where it sat on a shelf in our living room.

Aunt Maxine remained single all her life. She served in the WACs during WWII, then had a long career with the State of Wisconsin. There were many things I didn't know that I should have, like that in her younger years she'd become a pilot. Maxine had a stroke back in 2006 and died shortly afterward. I remember the year because it was also the year I participated in the Gold Nugget Triathlon. I'm not religious, but maybe I am a bit superstitious. During the tri, I remember thinking of Aunt Maxine and for part of the way, I was racing for her and with her, to make her proud. To show her I was strong, like her.

So, as I was reading my book, naturally, I thought of my aunt. I tried to think about what message was in this book that told her it was the right gift for her 15-year-old niece. And it was a message of strength, of independence, friendships, relationships. But mostly, I saw that it was a message of discovering your own sense of self at each stage of life. And the stage of life Lindbergh was in when she wrote the book? Her early 40s. And so, the book I received as a teenager, strangely turned out to be a good book to slip into now that I'm in my 40s. 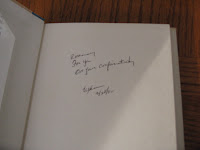 Some of her musings might seem a bit dated, but in the 1950s, Lindbergh recognized the value of the feminist movement in helping women give meaning to their lives beyond family and into the professional realm. What, after all, would be her value after raising the children? Thinking of the context of the times, after so many women had spent the 1940s in the working world helping the war effort, were all of them going to be satisfied being homemakers? My aunt's generation kept open the doors that had been busted down by the suffragists who fought for our rights. Rights to make all sorts of choices, not only at the ballot box.

To marry or not. To have kids; to not have kids. To have a career, or not. To follow our creative spirit. To be adventurers in this big world. There's a lot of hope packed into the gift my aunt gave me. And sometimes it seems I've followed a crazy path, and I've sometimes made bad decisions. But absorbing this book and taking the time to think about where I am in my life and what I still want to do, what I felt was calm. A calm accompanied by the sound of the ocean. A calm that told me that at 45, I am in the right place.

Note: Now that we've been home for a week, I'm going through unfinished vacation posts.
Posted by bikegirl at 11:38 AM

Anne Lindbergh was an amazing woman. If she hadn't been overshadowed by her ultra-famous husband, I think she would have been better known. At least as someone other than the wife of Charles and mother of their kidnapped baby. I read Gift of the Sea about 10 years ago. Maybe I'm at the age to re-read it.