The house is quiet now. Just me, Jon and Kitty, all of us having eaten our share of salmon. Last night the house was filled with new friends and their pre-race energy as a handful of endurance bikers prepared to start the long ride - or push - from Knik to McGrath on the Iditarod trail. Quite a way to return from our vacation.

We arrived home from our trip early Saturday morning to a house full of people and a day of activity. The Iditarod Trail Invitational began today and our friend Pete (who's staying with us for a couple months) is doing the race. He invited a few out-or-towners to spend a couple nights here - after checking with us first. It's funny when a house of two, then three, adults doubles. For the last two nights, every room was filled. A futon in my office. A mattress in the bike room where I normally have my trainer set up. Fat-tired bikes and bike cases filled the garage. High-calorie trail food entered the kitchen.

All Saturday people were hanging out in the garage, moving throughout the house. Running errands and assembling bicycles. Talking food and races past. Later, a few more racers joined us for the dinner Jon volunteered to make for our guests; new friends and sometime rivals getting ready to hit the trail. They joked about newspaper articles, checkpoints and embarassing trail moments. That we were participants and witnesses to some of the top contenders enjoying dinner together was just part of the fun that the media doesn't see when they write the articles we've been reading in the newspaper about challengers, defenders and newcomers.

After all, it isn't just about rivalry. It's also about the spirit of adventure they all share. Of pushing themselves through all kinds of conditions to make the journey to McGrath, and in good time. I don't know that I could do it, but as I was sitting at the table last night, I did wonder what it would be like to be out there on the trail pushing or pedaling alone from one checkpoint to the next, accomplishing a feat of physical and mental perseverance. Against the elements, against the part of the brain that says it makes no sense to do this. Yet, there's an appealing part that says: if you don't go out there, you will never understand the thoughts that go through the mind of someone who is pushing their bike for miles at a time yet continues because they refuse to abandon their goal.

Admirable? Yes. Realistic for me? I don't know. Today, I joined two friends on a backcountry ski in the front range above Anchorage. I felt strong. I skied well. I wondered how far I could ski or bike in a day; if I could ever have the tenacity to do what our friends are doing. I thought (as I've occasionally done before) about entering a 24-hour race on a team, wondered if I could summon the discipline to train enough to be prepared for such an event. Then again, I think about the things I can accomplish; limits that are only set due to my lack of determination and refusal to push myself. Where do people find that push? Is it something they experience once, then are ever after determined to seek? The endorphin reward?

While we were in Hawai'i, I had an epiphany of sorts. I decided that it was kind of silly that of all the trips we've made to Kaua'i, I've never taken a surf lesson. Never thought it was for me; something I could handle. But this time I was thinking, 'why not?' So, we signed up for lessons and paddled out to the waves that were breaking not far off shore. It took some tries, but having the board pushed by a wave, paddling with all I had, then standing crouched over the large learner board as the wave pushed me to shore was quite a rush. I kept paddling back out for more. Two more visits to the 'bunny hill' of surfing - the second time when the waves were a good two feet higher - and I managed to catch a few more. I know it would take lots of practice to get good; not something that will happen until our next visit, but I'm happy that I tried.

Because there are so many things in this life to try and I don't want to reach my 80s and say, 'I always wanted to...' I'd rather hit 80 and look at Jon and say, 'remember when we...?' Life is about living on the active side of the sidelines. I may never do the bike race to McGrath, but that doesn't mean I won't one day hit that trail just to do a ride in the snowy wilderness, out of sight of Anchorage. Who knows if the trail will call me the way it calls others back year after year. The way touring has been calling me ever since that month in New Zealand.

Experience itself is a powerful draw. Accomplish something and you might wonder what you can do next. It keeps me looking forward, wondering what's going to happen next. Wondering what I'm going to make happen next. Calling, calling. 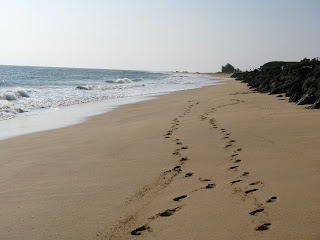 some auto-comments make absolutely no sense!