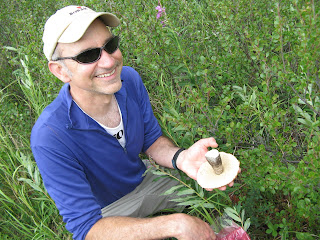 Found along the trail to Symphony Lake.
If April showers bring May flowers, then July showers bring mushrooms. Last Sunday when Jon and I hiked to Symphony Lake (south fork of Eagle River) he was optimistic that we could find a few mushrooms. He packed his knife and a mesh bag just in case. We did have some luck along the trail as we found a few boletus mushrooms with their distinct rusty-brown colored tops and wide white stems. A few had been nibbled by ground squirrels or other critters so I insisted he leave at least one out of a small cluster for the wildlife to enjoy.

The unusual thing about this hike was that I was the one with the mushroom eyes. Normally Jon is the one who spots them emerging from under last fall's brown leaves or under a shrub or in a stand of tall grass. So when I started seeing them, I understood his thrill at finding these little treasures. If you've never foraged, it's akin to an Easter egg hunt or any other scavenger hunt where half the fun is in the finding. If you're not finding, it's no fun. Of course, if you're successful, you may have lots of work ahead of you.

We only bagged a few, enough to enjoy in our pasta the next evening and for three trays in the dehydrator. After a few more days of rain, yesterday we decided that we should take a walk through his usual mushroom-hunting grounds. Up the trail, around the marsh, over a hill. We saw some that weren't edible, and some we weren't sure about, but we didn't see a single boletus. A little disappointed, we returned home where he made a meal of fresh salmon with mushroom risotto that used last year's dried shrooms. Delicious, as always. 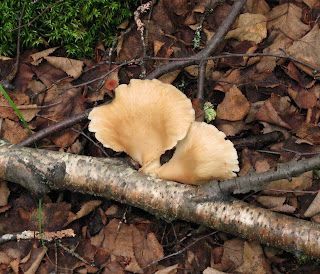 These look like oyster mushrooms, based on photos I've seen, but we've
never picked them. They're growing out of a birch branch on the ground. 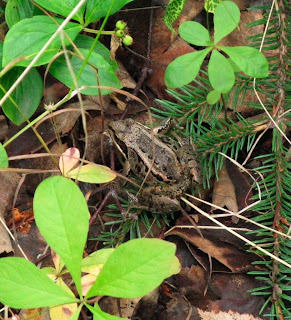 When you're scanning the ground for mushrooms,
you just might spot some not-so-big wildlife.
Then, this morning as he was getting ready to leave for work, we were strolling through the yard to see what mushrooms were growing there. That's when I found this King Boletus! 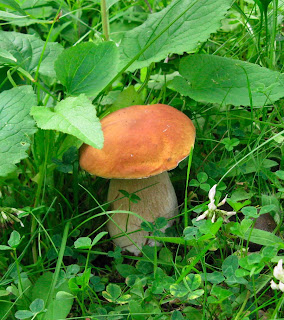 And there was a little one right behind it!
Now that I have the mushroom eyes, I'm beginning to understand Jon's little obsession. Maybe I'll even try to cook something.
Posted by bikegirl at 2:46 PM

ken and I fell in love over Boletus coupled with white wine and a long hike.....