into the unknown forest 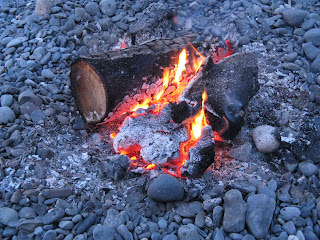 A few years ago I was in a writing class. One of the participants, Angela, is an artist who worked for years at an outdoor gear store in town. When she told the class that her goal was to leave the store and work full-time on her art, one person pleaded: "But you can't leave..."

I think of that sometimes, how tied up my identity is with the job where I often put in more than forty hours a week. How people see me as an expert whose advice is sought, who is so connected with Paramount and with cycling... I mean, I even took on the handle Alaska Bike Girl, affirming my identity to the rest of the world. But eventually, I have to push myself away and follow my goals.

I'm a writer. And if I want to be a writer, I have to act like one. Think like one. I must write. More than one book. More than a blog. I have to live the part by dedicating my time to finishing the short stories that are only up to five pages long. Start the projects I've only jotted down as ideas. Pursue the visions that need more than just a few hours a week. It's become obvious that I can't write at the level I want and have a full-time job (and a healthy relationship with Jon). I have to make a clean break. And this is when it happens. Friday is my last day.

I've put this off for some time. Over a year. Hell, I started drafting this post back in May! And it's tough to commit to leaving my job when so many people are stressed about the economy, losing their jobs and making financial sacrifices, but I have been planning and saving for this day. What made me wait was the same thing that can hold anyone back from making a big change: fear. Fear that I was doing the wrong thing; that I would regret my decision; that I wouldn't be able to make a living as a writer.

Almost two weeks ago, another Alaskan woman in her mid-40s announced she was leaving her job. She looked nervous on camera, as would be expected. Since the announcement, I imagine she feels a bit relieved. That's how I'm starting to feel. Because deciding to make a career or job change is something we hold onto as a big secret, partly (for me) out of fear that we won't have the guts to follow through with it. Telling a close friend or a partner is one thing; announcing it to the community is another. It's hard to take it back once you set things in motion. It's scary not knowing how it's all going to work out. But the signs were everywhere, including a chance encounter with a former Anchorage Daily News editor.

Jon and I were at a party for a friend who was about to go in for brain surgery. He used to work for the ADN, so there were lots of people there from the paper. As Michael Carey was preparing to leave, I had a chance to reintroduce myself to him - we met many years ago at an editorial board meeting. I told him I was getting ready to leave my job to write full time, to which he advised that I not delay. You just have to do it. Other writers and artists seem to understand this need to pursue that creative something that is boiling up inside ourselves, pushing and calling us to let it out. But heeding the call is akin to stepping into an unknown forest at midnight, barefoot and without a headlamp. It would much easier to stay where I am.

But I know that if I didn't take the step, I would regret it. And life shouldn't be measured with a list of regrets, but with chances taken, passions followed. I've had a good run working at Paramount. I've worked with some fantastic, smart, funny, committed people over the years. I've met people from all walks of life and from many points on the planet. I've listened as people told of their plans for adventure and heard their stories upon return. It's been a fascinating and rewarding time, but there is so much more I need to do and say.

I think our biggest tragedy is that we don't wind up shooting for the stars and we get stuck staying in one place because of comfort.....we can always move forward and better ourselves.

Good for you, Rose. We'll miss you at the bike store, but nobody wants to buy a bike from a writer, anyway.

You'll do fine, the worst that can happen is that you'll learn something, and how bad is that? It should happen to more people!

Actually I really enjoyed buying a bike from a writer ;-)
We'll certainly miss you at Paramount, but wishing you all the best. Change can be scary, but it often is very rewarding in the end.

Be the Ball, Rose, be the ball.

Way to go Rose. You only live once and if you do it right that's enough. I can't wait to read, whatever you produce.

Congratulations on your decision. You already succeded at this once so great opportunity awaits you.

Hope to have the huevos to do the same someday soon - looking forward to your future works!

Thanks everyone for your support. It's a big move, but I already feel good about it.

Thorsten, what you really don't want to do is buy a bike from a cartoonist! Eh, Peter?

Jo-Ann, I don't know about "being the ball." Basketball analogies in July fall flat to Alaskan's ears...

Anyway, major news and exciting things will be posted here, along with my usual thoughts and stories on life here in Alaska. You know where to find me.