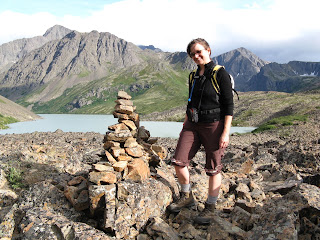 Eagle Lake
On a hike several years ago Jon and I reached the crest of a ridge and saw a man toppling cairns that marked the trail. We asked him why he was doing this, this act of destruction. He answered that people build too many of the stone markers when they don't need to. He referred to the overuse of the cairns in the Lower-48 as though they were graffiti. We told him they had to be close together because at times the area could get very socked-in. We didn't expect to change his mind, but we also figured this guy had never been in a cloud bank when trying to follow a faint trail through the high country.

When the clouds push in, you lose your sense of direction. Which way is north? From which direction did we enter? Where is the way out? Jon and I have been caught in this sort of cloud bank. Years ago near Mint Glacier we were hiking around a tarn and hadn't noticed the clouds coming up the valley. We were halfway around the tarn when we lost sight of where we had entered the boulder field that surrounded it. The disorientation that followed caused us each to react differently. As I tried to reassure myself and Jon that we'd find our way, he started rationing food. He seemed near panic. We continued around the tarn, with a sense of purpose: to reach our destination. I tried to stay calm.

Eventually, I found a patch of snow I recognized because on the way up I'd scooped out enough for a snowball to throw. At almost the same time, Jon heard a voice calling us through the cloud. Earlier in the day, we'd run into someone we knew. Now he was hiking up to look for us or maybe to just give us direction. An audio-beacon. Jon still refers to Kim as our savior.

Later, Jon told me that being in the cloud reminded him of a night he spent in a snow cave during a windstorm in the front range of the Chugach Mountains, just above Anchorage. He was tired but didn't want t0 sleep too much for fear the entrance would fill with snow and suffocate him. He even set the alarm on his watch to wake him every two hours so he could shovel the entrance. He was only miles from the city but in the darkness of the cave he feared for his life.

Early this spring, just as the weight of winter was leaving us, I found myself in the cloud bank. When I had time to myself, my mind would wander to a place where I could not see the way out. Though the days were warming and getting sunny, I didn't feel the optimism others around me expected to see. It was a serious funk. I had little motivation. I wanted to hide. Even though I normally could extricate myself from it, this spring I wanted to avoid the things that make me happy. I didn't want to read. Sometimes I didn't even want to bike. I began looking at one-way airfares to Europe. I wanted to run away but I couldn't explain it to anyone. I didn't want to burden Jon with the details of my funk, but he was also at a loss for how he could help.

My life and my career felt much like circling the tarn, over and over without a voice or a sign to guide my way. I finally met with a counselor who helped me verbalize what was on my mind. She helped me begin to set a course for getting out of the fog and move in the direction I wanted.
She helped me see my fears: What if I made the wrong move? What if I was letting someone down? Realizing that the only person I needed to worry about letting down was me helped me to make the move. And if I'm not letting myself down, I'll be a much happier person to be around. We all get stuck from time to time. Not all of us are fortunate enough to find someone or something to guide us. I'm still plotting my course, but I'm headed the right direction.
Posted by bikegirl at 9:50 AM

life is a trip isn't it? any path you are on leads in some direction; hard to go with the flow and let go and have faith, follow your gut. yeah, when i did that hike to Reed Lake, i felt the fragility of life, an edge.....we are really just specks in this universe.