all or nothing - part II 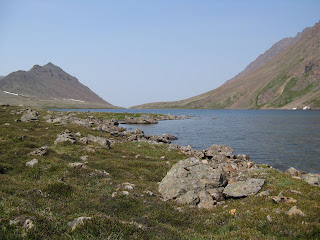 Looking west from the far side of Rabbit Lake.
Our friend Pete recently returned from the Lower-48 after a head-on collision with a truck. He was on a bicycle, timing himself as he pedaled the Continental Divide Trail from Canada to Mexico. He returned to Anchorage to recuperate and figure out how he was going to pay for a very expensive helicopter ride and medical bills. He has a broken collarbone an injured hand, and lots of body stiffness.

When he showed up at the shop last Monday afternoon, his tan face and long hair were good to see. We were all concerned after his wreck, so seeing him acting his usual self, boyish humor included, was a relief. Now that he's momentarily off the bike (allowing me to maybe keep up with him), we decided on a little hike. 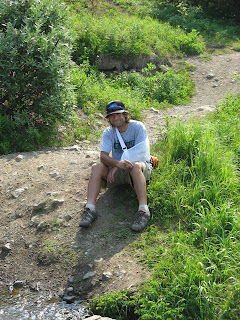 Next to a stream: stop picking that scab!
July Seventh: Rabbit Lake Trail. Another hot day. A little sunblock this time but one application is just not enough for a full day out there. I still compare to last summer when we still had snow patches along the side of the trail in early July and wore long sleeves to keep off the chill. 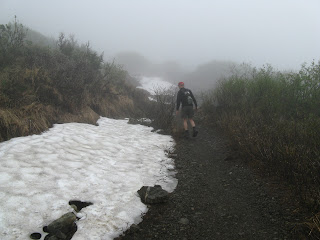 From the archives: July 10, 2008.
This year the streams provided a splashing relief from the warm, still air. Instead of fog, smoke from forest fires clouded the air. When we reached the lake, which we had mostly to ourselves, I soaked my feet in the water before I continued hiking around to the far shore while Pete napped in the sun. 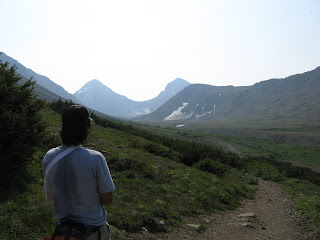 Destination: just below the Suicide Peaks in the distance.
Maybe it was because the 11-mile hike was only my second longish hike of the year, but that warm sun really sapped my energy. Rehydrating and napping were the best ways to recuperate so I'd be ready for the next day. I'd promised Jon I would ride with him and a product rep from Giant. The plan: ride Lost Lake Trail, just outside Seward.

July Eighth: Lost Lake. Just after noon. Jon, Paul and I hit the trail from the Primrose Trailhead on the south shore of Kenai Lake. The day was hazy with smoke from forest fires, but not so bad that we actually smelled the smoke. Climbing through the forest I must always remind myself that the payoff for pushing my bike over the ever-more-exposed roots will be an expansive view from the top and a sweet singletrack descent. Though I know I can bail anytime I want, I know that the best is ahead so I plug away at my own pace, swatting at the biting flies that try to gather on my legs whenever I stop. I try not to stop. I'm also relieved that I'm not the only one who has to dismount. 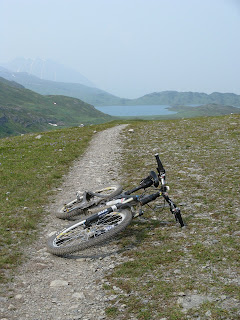 The view behind us of Lost Lake, just before the final summit.

Lots of people do this ride from the other end so they can blast through the descent to Primrose. I've been meaning to do it that way but I love the view of Seward from the top of the climb and the occasional views of the bay whenever I stop along the descent, though this day the views were barely visible through the veil of smoke.

Jon and I took a break to cool off in one of the alpine lakes. I could feel my body temperature dropping after just a couple minutes in the water and from the cooling breeze that was blowing from Seward. I felt ready for more climbing as we passed Lost Lake and I again settled into my pace. 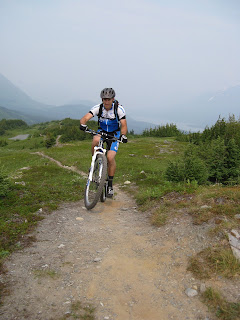 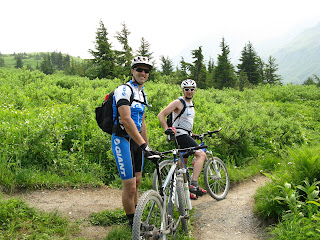 Paul and Jon ready for the final descent.
Did I mention that Paul works for Giant?
The descent was fast and uninterrupted by other trail users. I slowed for some patches where gravel had been added to the trail to improve the surface. (I imagine that the trail crew hoped rain and trail users would compact the gravel, instead it was loose, so I had to watch my corners as my tires sunk in.) Rocky sections, water bars and dips, skinny sections of trail, shale on the side slopes as we neared Seward. All were familiar yet new since I haven't been on the trail in a few years. At the parking lot we heard ravens calling out to each other while we pumped our tires and had a snack to get ready for the final stretch.

We formed a paceline to ride up the highway to return to the car. All told: 15 miles of trail; 12 of road. It made for a long, satisfying day. Exhausting. A welcome beer at the car before heading back to Anchorage for a salmon dinner. Paul got a real Alaskan mountain bike experience. Everything but a dip in a mountain lake.
Posted by bikegirl at 11:20 PM