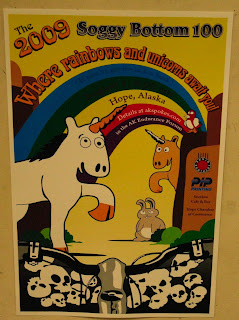 The Soggy Bottom 100 (plus) mountain bike race started this morning in Hope.

Jon and I got some inspiration from this poster to make some trophies. Actually, I saw a unicorn at Metro Music & Book and got the idea that we should do something for the winners. Classic Toys had finger puppets and Jon mounted them on the stands for the male & female winners. And that's the difference between how Jon and I approach things: I would have just said, "here, have a unicorn," while Jon turned it into a trophy to present to someone. Something they can display on their mantle, along with broken derailleurs and oosiks. Hmm, maybe he just wanted to use his power tools... 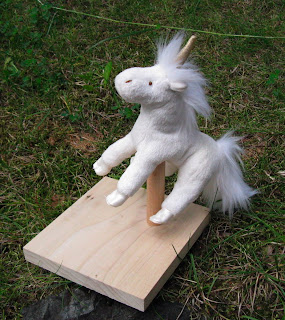 if you aren't seeing unicorns, you aren't riding hard enough!
Then, for Carlos, the guy who puts it all together each year, the large unicorn I first saw at Metro...and a monkey (I don't know why - Jon's just creative that way). 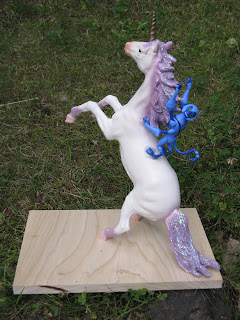 Luckily, Jon also found someone to take the trophies to Hope where the race starts and finishes at the Seaview Bar. Thanks, Jim. 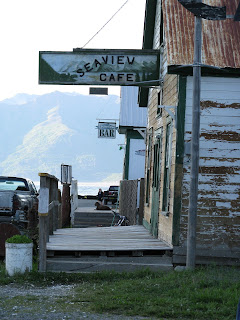 There's been lots of rain in the last week, so I hope it's sunny on the peninsula like it is today in Anchorage. I also hope the bottoms don't get too soggy. Me? Maybe I'll go for a little ride in town.
Posted by bikegirl at 10:16 AM