I once read on a band's website that they were either too busy to post any news or there was nothing going on, therefore nothing worth posting. The past week has been mostly the former. Weather in the 70s and even 80s - uncommon in Southcentral Alaska - has kept me busy biking and hiking in my free time and too exhausted to write coherent notes about it all. It seems I could post a calendar of the past week's activities. True to my day planner, it'll be a photo calendar:

July Second: Jon and I head for Hope, AK. On the way, ride part of Johnson Pass Trail - to Bench Lake and back. About 19 miles of beautiful backcountry mountain biking. 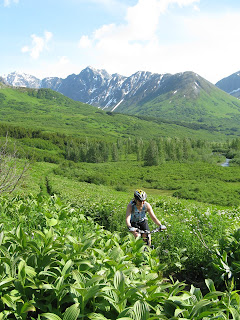 Riding through a meadow lined with
false hellebore (I think) and cow parsnip. 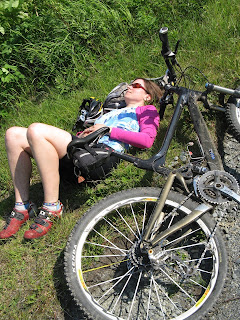 Resting on the bank of Bench Lake. 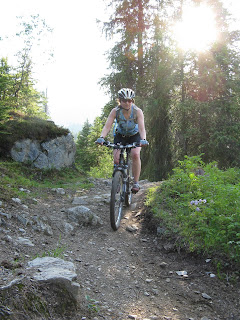 To the bridge!
Soon we would spend three nights with our friends, Lynn & Art, at their cabin. Friends would drop in all weekend, most bringing food, some bringing stories and news from outside this small laid-back town.

July Third: Hit the trail at about 1:30 with my friend Jo-Ann after driving to the Devil's Pass Trailhead (Jon and Art would ride from Hope to Devil's Pass and pick up the car). We set a comfortable pace as we climbed along a creek, up a valley that opened into the wide tundra of the pass. Clear skies. Once in the pass the wind cooled us after the sweaty climb. We had more climbing ahead, but after the high point on Resurrection Trail (2,600 feet), it would be mostly descending. All told, about 34 miles of happiness. 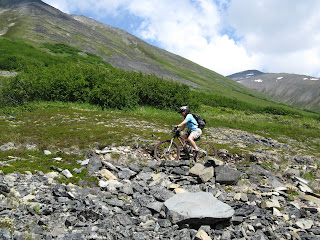 Jo-Ann cruises through a rock garden. 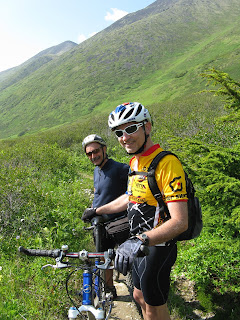 Meeting up with Art and Jon - the most important
piece of information: where I stashed their beers
in the creek for when they finished the ride.
Our news blackout ended when we arrived at the cabin, anxious for a cold beer and a hot sauna, to learn that the governor had announced that morning that she would resign. Why, when and what would happen next fueled speculation around the campfire that night and in downtown Hope the next day. An iPhone with a very slow connection gave us a news fix the next morning, but speculating was more fun.

July Fourth was a good day to rest, so while Jo-Ann's man, Adam, tackled a 90-ish-miler, Jon, Jo-Ann and I biked to downtown Hope to catch the breeze coming off Turnagain Arm and get an ice cream at the local stand. No idea why there was a blue dinasaur hanging from the flagpole. 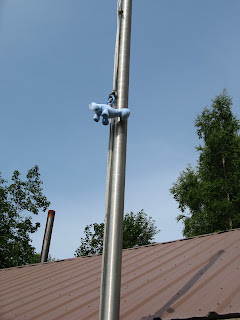 I don't know, do you think this is political? 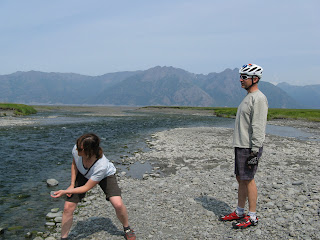 Jon offering pointers on skipping stones.
I didn't think I needed a helmet for this maneuver. 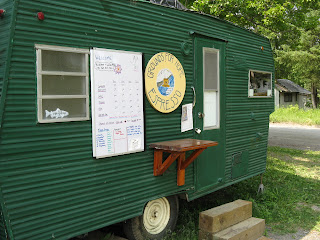 For Pam & her mom: the coffee cart is still there, though they were on a break. 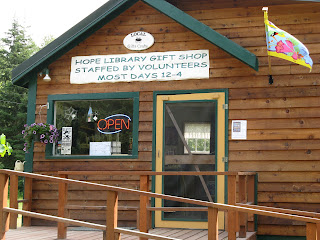 How do you like those hours?
Posted by bikegirl at 10:14 PM

I love the first photo of you slicing through that wonderful green. The back country riding is great from what I remember on my Russian Lake venture......It looks like you make the most of it.
Katherine