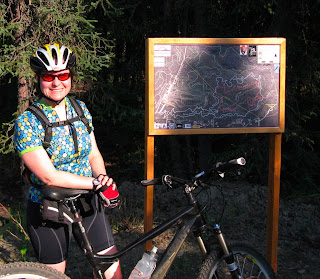 after the final descent... hooray for singletrack!
In the fall of 2004, I went to a meeting of the Far North Bicentennial Park users. It was their first monthly meeting after returning from a summer hiatus. The room was packed. A few days earlier, someone had posted signs in the park urging park users to attend. There was chatter on the online forums.

The reason: some trails had been widened and smoothed to make trail grooming for skiing easier in winter. Cyclists were mad; skiers didn't get it. There was lots of frustration at the meeting. People weren't sure how to get all the user groups to get along. I remember finally saying something about people getting involved if they want better trails. Others said the same.

Soon, I received an email about a meeting to talk about what we mountain bikers could do next. What started was an idea for Singletrack Advocates (STA). We were going to maintain trails, preserve skinny trails. We would even create skinny trails. I don't know if at that time many in the group envisioned what would happen in the next few years. Trailbuilding schools with IMBA, consulting with the municipality and trail design experts, working with all the different park users to build understanding, organizing the mountain biking community. Attending meetings.

Then, last year the group put in nearly eight miles of twisty, rolling singletrack in the same park. An all-volunteer group. And like any group that gets things done, it's the unifying force of one person that makes all the difference. A person who can rally people, work with different user groups, find the resources and keep charging through, breaking red tape like a champion crossing the finish line.

When Jon and I rode the STA trails this evening after work, I knew that without our fearless leader, Queen Bee, I wouldn't have been wearing that perma-grin as I descended on Stinger. There would not have been a Stinger. Thanks Janice for keeping at it and for rallying all the volunteers. And thanks volunteers and steering committee. I'm proud to be a part of STA.

more! more! more! If I throw a tantrum or beg or whine can we have more? By far the best thing to happen to mountain biking in Anchorage since.....well,lets just say it IS the best thing that has happened in my 20 years of riding here. Thanks for sharing it with me.

Here in MN we mtb'ed on XC ski trails for years until we went through similar growing pains -- the ski trails were eroding horribly and neither group was happy. We've now got miles of separate sustainable singletrack thanks to the MN Off Road Cyclists with help from IMBA. Makes all the difference in the world.

Congrats to you and good luck continuing the momentum!

Queen Bee is the patron saint of Anchorage mountain bikers. I wish we could clone her.